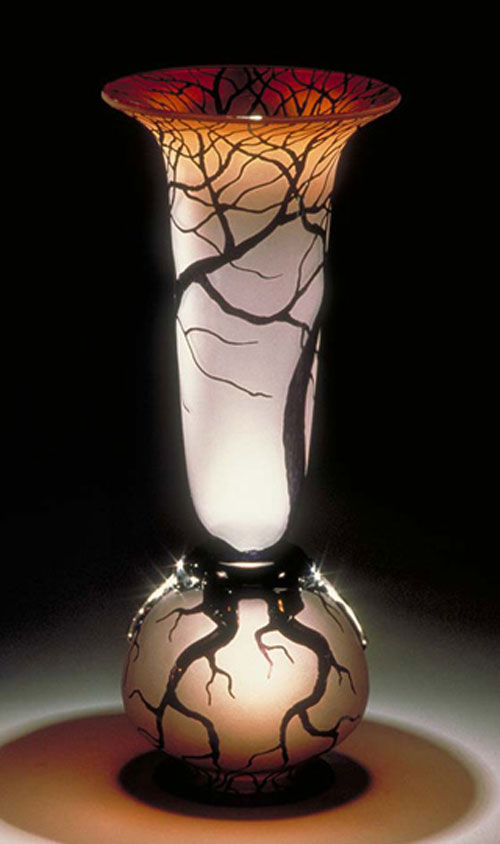 One of the most beautiful objects in the museum is situated within the Decorative and Fine Arts Gallery, in close proximity to a Tiffany Studios stained glass window and a Severin Roesen still life painting. It is the work of native son Bernard Katz. Bernard Katz is the son of Bernard and Bonnie Katz, chocolatiers in downtown Williamsport. His exquisite vase from his Tree and Root series is one of only a few to be produced. One of his vases similar to it was featured on the Fall 2006 issue cover of World Art Glass Quarterly.

His biography is impressive. “An American glassblower, artist, and sculptor, Bernard Katz has established a dynamic yet distinct style. His work can be found in public and private collections worldwide… Including the United States, Canada, Hong Kong, Saudi Arabia, and Turkey, Great Britain. His work is among the art collection of 2004 Nobel Peace Prize winner, Wangari Maathai.

Bernard has been the subject of interest in numerous books and magazines which have featured the artist. He has exhibited in the top art shows in the United States including The Smithsonian Craft Show, Philadelphia Museum of Art Craft Show, and Long’s Park Art & Craft Festival.

Bernard Katz has been working in hot glass for over 20 years. He graduated from Temple University’s Tyler School of Art specializing in glass blowing and sculpture in 1989. He also attended the West Surrey College of Art & Design in Farnham, England.

An exquisite object! And we have one in the museum which you must come to see when you return to the Museum. Now, here’s a question? If you were stranded on a desert island and a box of candy washed up, what kind of candy would you hope would be inside the waterproof package? Gary Parks’ answer: Reese’s Peanut Butter Cups. Hope that box is mighty big!!!

"Otter" Shock
All Visitors Will Be Welcomed to the Taber Museum…Except One!
Through the Fire
The Work of a Talented Artist