All Visitors Will Be Welcomed to the Taber Museum…Except One! 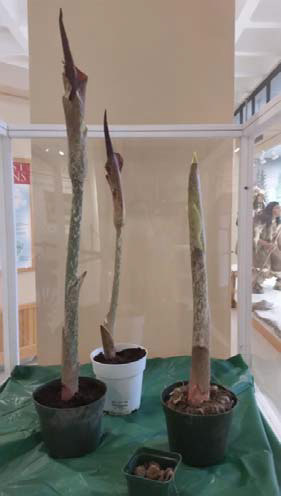 We, at the Lycoming County Historical Society, sincerely apologize for the continuation of the museum’s closure. We can’t wait to see you! And well, frankly, we aren’t as welcoming to all of our visitors. For the past several years, we have allowed Lily into the museum. And she and her friends have raised quite a stink! Because of timing, the voodoo lilies which we normally have on display at the museum at this time of year are blooming, and of course, we are CLOSED!So, we share the picture of ‘Lily’ and share her story and hope fervently for her return next year.

Amorphophallus Konjac is a large Asian plant, also known as the devil’s tongue, the elephant-foot yam, Konjac, or konnyaku. The plant is a member of the philodendron family. The corm, or tuber, produces a single flower in the late winter or early spring. A sturdy stalk bears a large, brownish-purple to maroon spathe, which can be as large as three feet in diameter surrounding a purple or mottled floral spike. The flowers are actually tiny individual female flowers at the base of the spike. The male flowers appear in another zone of the spike. When in bloom, the plant produces an odor similar to a dead animal, the smell of which is intended to attract carrion flies which will then pollinate the plant. The flower will remain in bloom for approximately five days.

This plant is grown for harvesting in certain areas of the world. The starchy tubers are edible and processed into a tasteless flour or stiff jelly. The Japanese use konjac flour to make shirataki noodles and the plant’s starch is used to make a popular fruit jelly snack. These botanical specimens belong to Larry Fryda, who serves on the Board of Governors of the Taber Museum.