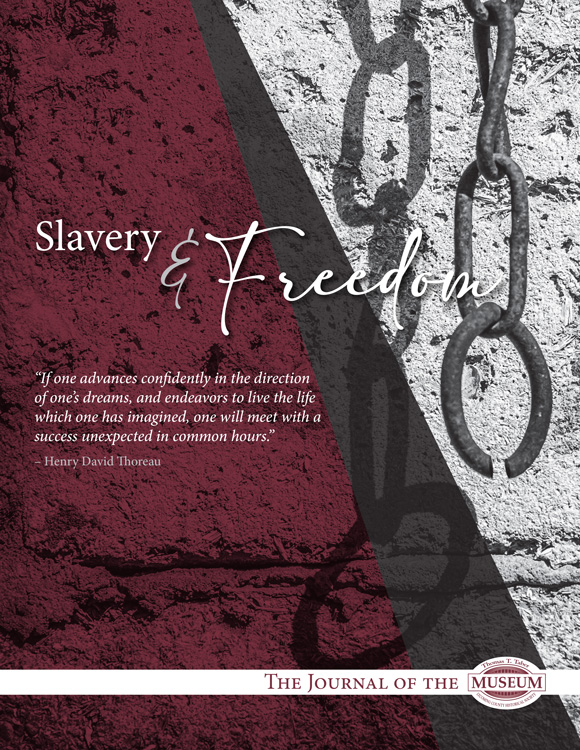 SLAVERY & Freedom: Two words that have and will remain, emotionally charged.

This Journal elaborates on some of those very issues that fuel those sentiments.

The fascinating study of a quilt conducted by Ricki Moler reveals a Society of Friends who adamantly opposed slavery. The quilts, through a series of inked sentiments, reveal the Friends’ (or Quakers) opposition to human bondage. Through the squares, their stance is clearly spoken. More covert actions, such as serving as stations on the Underground Railroad and teaching African- Americans to read and write, were necessarily secretive. A second article, by Joanne Long, chronicles the rise of an African-American family.

And then, of course, there is the freedom of expression. The atypical life of Dewing Woodward, ahead of her times, is revealed in Mary Sieminski’s treatise on an artist who defied standards of feminine conduct during the early Twentieth Century. She established an artistic community in Provincetown, Massachusetts. Later, she established a community in New York which promoted plein air painting of nude subjects! And Eber Culver, who exhibited his freedom of expression in his architectural wonders which dot the landscape.

The frontispiece of the Journal acknowledges the contribution of the L.L. Stearns Department Store, which flourished in downtown Williamsport from 1889 until 1984. Everyone who grew up in the area has a particular memory of Stearns- whether it was the live parakeets in cages, the luncheonette, the homemade pies or the bell that swung over everyone’s heads. Those memories were brought to the foreground when we gathered Cindy Stearns, her family members and her ‘extended’ Store family to reminisce. On Thursday, December 8, 2022, we hosted one of the largest crowds in the history of our Coffee Hours- one hundred sixty people! We are thinking of expanding these ‘memory sessions’ to include former employees of Trimtex, Sylvania and other fixtures of Lycoming County history. This year, however, we pay homage to L.L. Stearns and his descendants, with a special tribute to the late Charles R. and Nancy Anderson Stearns. It was through the generosity of their four daughters that the Museum has accepted the portrait of L.L. Stearns and store memorabilia into our permanent collections.