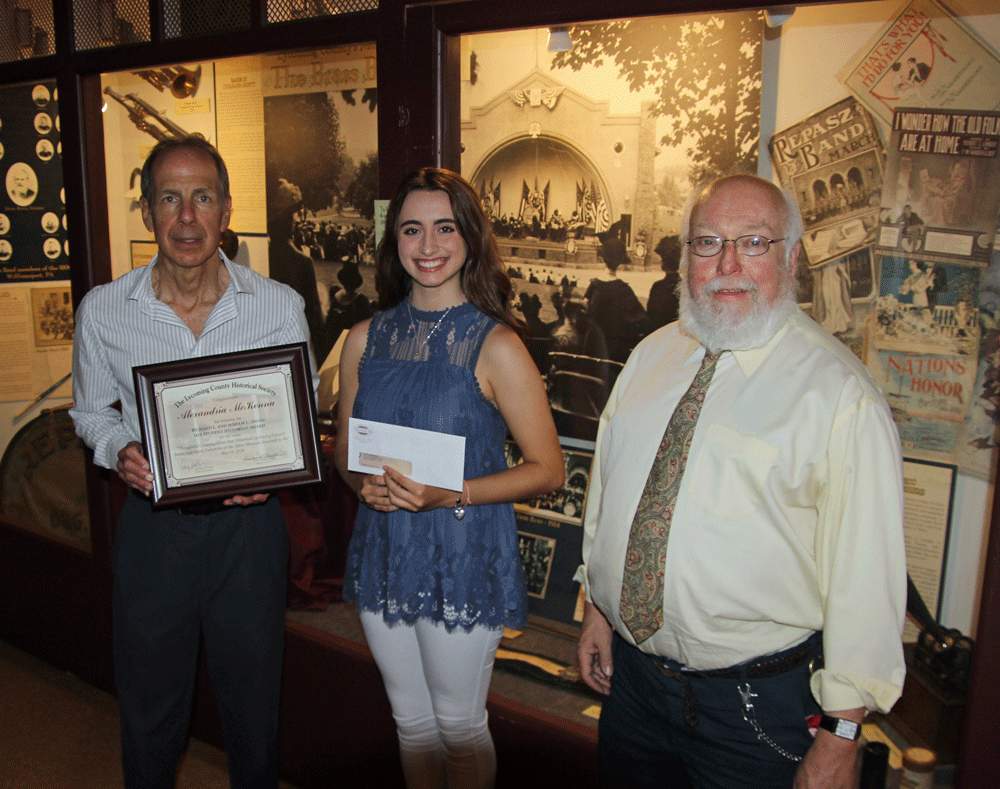 The winner of the 2020 Richard L. and Miriam L. Swan Mix Student Historian Award competition is – Alexandria McKenna of Montoursville.The winning entry, Thoughtful Contemplation that Historical Lycoming County Bands and Music Industries at the Taber Museum Inspired in Me, was chosen by a panel of educators as the best of a number of entries submitted by local seniors.

This competition invites seniors attending schools in Lycoming County to submit an essay on an object, artifact, or an exhibit displayed at the Taber Museum, which includes a description of the item or exhibit and an interpretive explanation of how the chosen historical subject relates to modern life. The winner of the competition receives a $500 prize.

The award presentation ordinarily occurs at the Historical Society’s annual meeting in April, but due to the Museum’s closure, the award cannot be made in person.

Alexandria is a senior at Montoursville Area High School. In the fall, she will be a Schreyer Honors College scholar at Penn State University (Main Campus) and will be majoring in Biology, with the goal of becoming a physician.

Congratulations and best wishes to Alexandra.

For as long as I can remember, bands have been a large part of my life. At C.E. McCall Middle School, my love for bands burgeoned once I joined concert band as a beginner flutist in fifth grade. During my fifth-grade experience, I was inspired to prolong my participation in band. By the time I became a senior at Montoursville Area High School, I had performed with concert bands, the marching band, and the Lycoming County Band at several festivals. As a result of my endeavors, bands will perpetually captivate my interest. 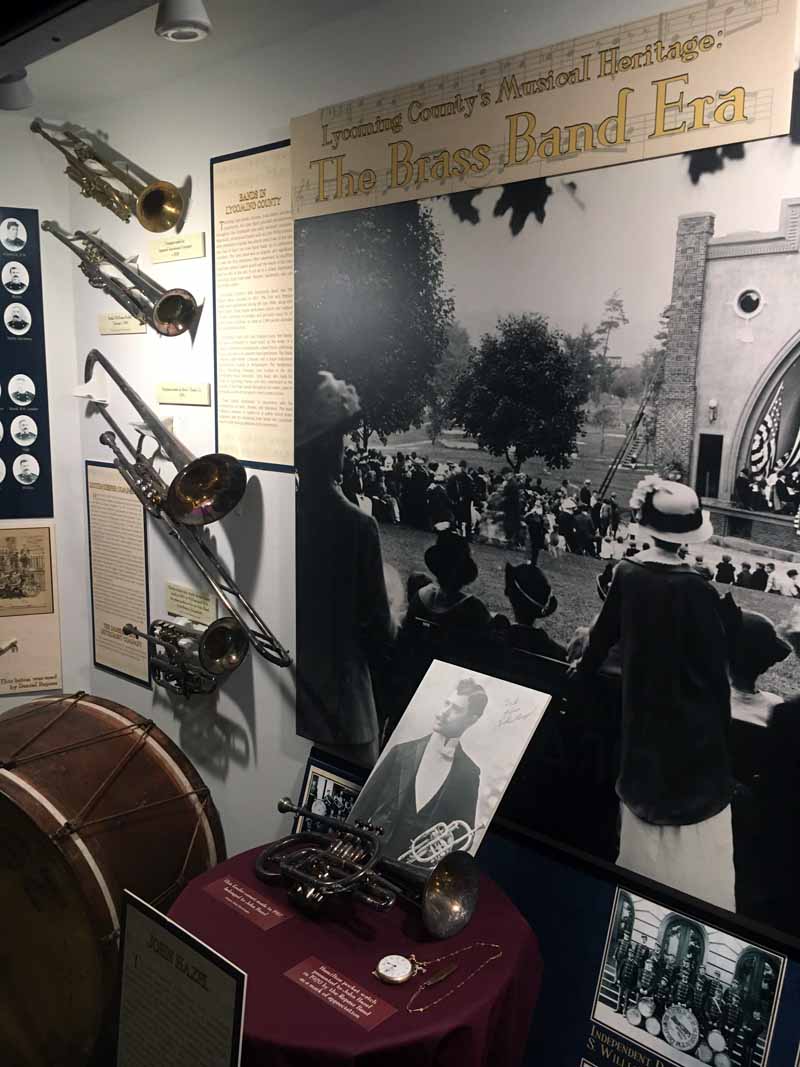 Recently in my Honors Contemporary Social Science class, my teacher covered aspects of Montoursville’s history, such as Adam Montour, Governor Shultz’s Mansion, and the Repasz Band. Not surprisingly, the part of the lecture concerning the Repasz Band piqued my interest. Since the subject was only briefly mentioned in class, I decided to visit the LCHS Thomas T. Taber Museum to learn more about the legacy of local bands. At the Taber Museum, there is a glass case dedicated to the local history of bands and music industries. The case provides an accessible educational recording and visible text to help educate the significance of the displayed artifacts to viewers. Many of the artifacts were produced by past music industries, such as a brass cornet created by the Brua C. Keefer Company, and music with fanciful covers published by Vandersloot. Several other artifacts were once associated with Lycoming County bands as well, such as Daniel Repasz’s baton and John Hazel’s cornet. The display case is important because certain bands were once quite popular and past music industries provided such bands the needed sheet music and instruments. The historical music industries and bands also played a significant role in the development of Lycoming County and exemplify the quality of life that people experienced in the past.

The display case dedicated to bands and music industries that once existed in Lycoming County earned a spot in the Taber Museum because both accurately reflect history. For example, the aspects of the display case pertaining to bands portrays the type of entertainment that people demanded in the past. According to the facts and artifacts, lavish entertainment in the form of instrumental music was extremely popular during the 1800s and 1900s. Such an insatiable desire for bands is understandable because newer forms of entertainment, such as televisions and radios, did not escalate until the late 1900s, which is around the time the popularity of bands decreased. In the display case, the inferred popularity of the Teteque Band and the Repasz Band strongly supports the idea that instrumental music was highly demanded before modern times. The display case also insinuates that people in the past enjoyed local, frequent, and groovy band performances at various locations, including Lycoming County. Intermixed with the remnants of famous bands in the display case is information on past music industries that also reflects the quality of life that people once beheld. Older music industries, such as the Distin, Keefer, and Vandersloot companies, indicate that instrumental music used to be an endeavor as prosperous as the lumber industries that existed in Lycoming County as well. The music industries also support the idea that bands were a popular form of entertainment because high-quality instruments and sheet music were produced rapidly during the time period. On another note, the sheet music produced by Vandersloot in the display case indicates that jazz music was a part of the buzz for instrumental entertainment – correlates to the Harlem Renaissance period. The display case is essential because it depicts the type of lifestyle that people experienced in the past, and can also reveal how rapidly society has advanced up to the present-day.

As of today, instrumental music is a type of entertainment, yet innovations have impacted the popularity of bands. Since the late 1900s, the popularity of bands has slowly declined due to the advancement of technology up to the present-day, which has made modern entertainment extremely accessible all across the world. Today, instead of watching band performances live at theaters, schools, band shells, football games, etc., people may prefer to relish band performances on devices. The present-day astounds the past because public entertainment, such as groovy band performances at local places, is slowly diminishing - society is becoming a technological guru that depends on a virtual world. Along with devices, dynamic interests have had an impact on the popularity of bands as well. For example, society has developed an incredible fondness for sports. People can play sports at institutions, partake in sports at large stadiums, and cheer on their favorite teams from home. As a result of modern society’s interests, bands have become slightly less popular. On the other hand, a positive contradiction to the past is that bands have become an important feature at schools because administrators now believe that music is an important part of education for students. Interests and advancements have clearly impacted the success rate of bands, but what about music industries? Like bands, the profitability of music industries has slightly declined because its counterpart is not as popular as it once was. Music industries continue to provide sheet music and instruments to bands, but not at the booming rate that thrived in the past. Sheet music with hand-crafted covers is also rare nowadays, but brass instruments are still produced. On the flipside, a favorable contradiction to the past is the current production of other instruments, such as wind, string, and percussion. All in all, the impact of bands and music industries on modern society is comparable to the past in several aspects, yet dissimilar in other regards as well.

Bands had a significant impact on the quality of life in the past and are pertinent to the present-day, but what does the future entail? Based on the popularity of bands in modern society, the most probable prediction is that the success rate of instrumental music will further diminish until bands cease to exist. For example, marching bands accompany sports teams at games in the present-day, but the insatiable interest for sports across the world and the development of new types of performances may question the attendance of marching bands at live games in the future. Another reason to speculate that bands may not last in the future is due to technology. Technology is rapidly advancing and displays no signs of halting. As a result, technology may dominate all forms of entertainment in the future, which will significantly impact the way bands exist. If society becomes extremely dependent on technology over time, public band performances will cease to exist, but virtual ones will. On the other hand, the development of technology could advance the quality of bands. For example, instruments and other band equipment may become more high-tech in the future. Electric guitars exist today, but imagine all the other instruments that may become electric! Another aspect of the world to acknowledge in regards to the future of bands is public safety. Today, the entire world is experiencing phases of quarantine due to the coronavirus and if public safety continues to be threatened, then a virtual world with digital entertainment is extremely probable. Like bands, music industries will be impacted in the same manner depending on the type of future that is adopted. Music industries will either disappear due to negative advancements, public safety concerns, and lack of interest, or prosper due to positive advancements. Therefore, the stability of bands and music industries over time is highly questionable and uncertain as a result of the various futures that the world can choose to live in.