Erector Sets, Collection of George Logue, Given to Taber Museum 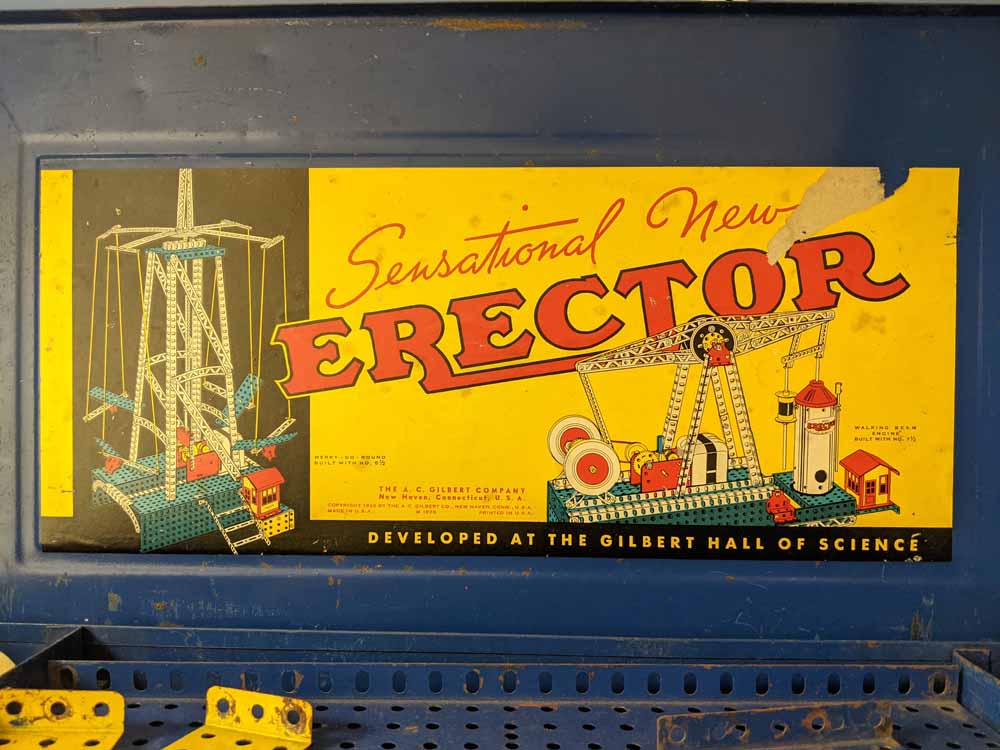 Many a young man woke on Christmas morning to find that Santa Claus had left an Erector Set for him under the Christmas tree. The young man’s imagination ran wild as he opened the wooden or later metal case with an array of girders, wheels, beams, nuts and bolts (and a motor!). His thoughts were in full bloom as he envisioned building a Ferris wheel, a skyscraper, or a “robot”.

George Logue was one of those young men. Born January 30, 1927, in Williamsport, Mr. Logue was the son of Dr. Joseph and Frances Baier Logue. As a young man, he received an Erector Set as a Christmas gift. In High School, he met another boy who had received a more elaborate set, creating even more possibilities for the two to envision and construct. After receiving a Bachelor’s degree in agricultural engineering from Penn State in 1951, he began a career with International Harvester, Huntsville, Missouri, eventually becoming the head of Research and Development. Preferring the challenge of inventing and construction, he returned to his native area and worked as a machine design engineer for Sprout Waldron in Muncy, PA. This ultimately led to his own construction contracting business and in 1957, George E. Logue, Incorporated was founded. 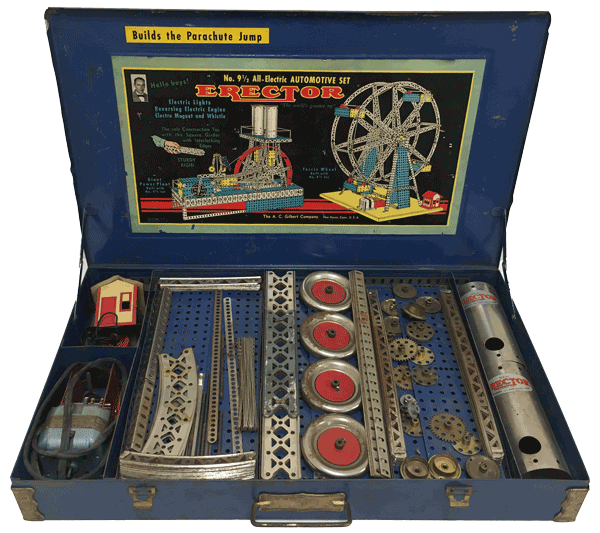 Mr. Logue fabricated specialized parts and developed new designs, resulting in five U.S. patents for heavy construction equipment and dump truck bodies. With patents and inventions under his belt, Logue returned to his boyhood inspiration- the Erector Set. He began collecting sets, including by happenstance, the set that he and his high school friend once played with. He amassed over one hundred sets by haunting antique shops and flea markets, and advertising in local newspapers and trade journals. George Logue passed away on October 30, 2012. In 2020, his family donated Mr. Logue’s Erector Sets to the Lycoming County Historical Society.

Erector Sets were first patented by Alfred Carlton Gilbert in New Haven, Connecticut by his Mysto Manufacturing Company in 1913. They were introduced at the Toy Fair which was held at the Broadway Central Hotel in that same year. In 1916, however, the Company was reorganized as the A.C. Gilbert Company. It became the most popular construction toy in the U.S. The Meccano Company ultimately bought the Erector brand in 2000.

Through 1932, the set was marketed in wooden boxes, but from 1933-1962, the sets were sold in painted steel boxes, colored red, green or blue. By the 1950s, all boxes were painted red. A representative sampling of the Erector Sets is on display in the lower hallway, adjacent to the Larue Shempp Model Train Collection. The exhibit was assembled by Museum Director Gary Parks with the help of Casey Haas, Museum staff, and Jauzzle France, former museum intern.

News station WNEP featured the exhibit on its newscast on February 24, 2021. Bob Logue and Gary Parks were both interviewed: