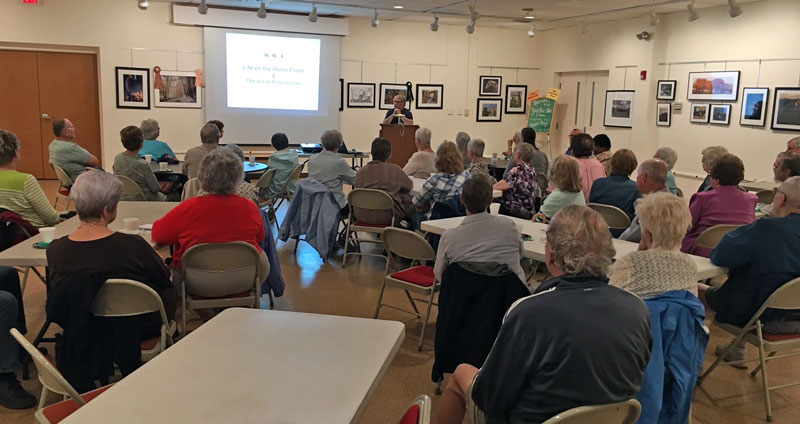 Mark Fritz spoke at the Taber Museum on Thursday, May 10, 2018 on the topic “Life on the Home Front & the Art of Propaganda during WW- I: How artful images were used to sway public opinion in favor of the war effort”.

The lecture conveyed to the audience a taste of what it was like to live through World War I as a ‘home-fronter’ in Central Pennsylvania. An emphasis was placed on the way the Wilson Administration used art and media to persuade home-fronters to support the war effort. The power point presentation employed photographs, advertisements, cartoons and headlines from local newspapers, specifically the Columbia County newspapers of the day. Posters were commissioned by Wilson’s ‘Committee on Public Information’.

Mr. Fritz is a retired writer and journalist. He is the author of four books, all of which deal with local history. Published under the auspices of the Columbia County Historical and Genealogical Society, the titles include The Doctor Montgomery Receipts, Small Town Doctor, 2nd World War in 1st Person and LETTERS HOME: World War I (a compilation of letters written to local newspapers by Columbia County soldiers, sailors, aviators, and nurses). Fritz autographed LETTERS HOME after his presentation.

Taber Museum May Society Program: A Documentary on the Austin Dam Disaster of 1911