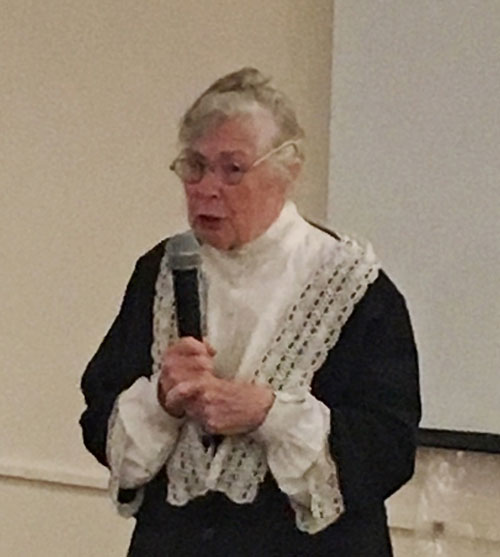 The Thomas T. Taber Museum of the Lycoming County Historical Society hosted ‘Abigail Geisinger’ at its September 2018 Coffee Hour. The lecture was a delightful event which revealed Abigail's great sense of humor amidst herr philanthropic efforts to supply an outstanding hospital to the community.

Abigail Geisinger is credited with building a modern general hospital in memory of her husband. In 1912, Abigail purchased the William H. Magill property for her hospital. Her motto during the construction of it was to "Make my hospital right, make it the best". On September 12, 1915, the George F. Geisinger Memorial Hospital was completed. Two years later, the hospital played a pivotal role in the receipt of wounded and recuperating soldiers, casualties of World War I. In 1921, Abigail died at the age of 94. She left over one million dollars for the operation of the Geisinger Memorial Hospital and now lies buried in a cemetery overlooking the institution she created.

An Afternoon of World War I- Era Music