Artwork of David Armstrong Added to the Museum Collection 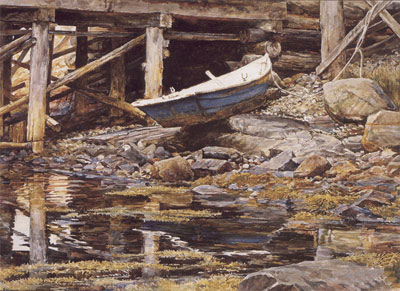 The museum has recently acquired a David Armstrong Limited Edition Print, “Clayton Holt”, numbered ‘94/1475’. The print was donated by Board member Marc Pompeo. David Armstrong remains one of the best known artists of the twentieth century, a contemporary and colleague of Andrew Wyeth, Bob Timberlake and Eric Sloane.

Armstrong was born in 1947 on a Connecticut family farm. On the farm, he developed a reverence for the earth and a desire to capture it in his paintings. He studied his craft at the Taft School, the Showhegan School of painting and sculpture, Bucknell University in Lewisburg, and Indiana University. Eric Sloane mentored David throughout most of his career. In 1976, David served as an assistant to Sloane for Sloane’s panoramic mural in the National Air and Space Museum, Smithsonian Institute, Washington, D.C.

David Armstrong was associated with the Hammer Galleries in New York City. Among the many exhibitions mounted, there was a two-artist exhibition featuring John Denver and David to benefit the children’s cancer research organization, the Windstar Foundation (1987);“Realism: A Continuing American Tradition,” with the three abovementioned colleagues; and in 1990, an exhibition to benefit The American Farmland Trust Organization, a nonprofit organization dedicated top reserving agricultural resources.

This print, “Clayton Holt,” is described by Armstrong: “Were it not for the graceful lines of this punt I would not have been drawn to paint it. But white shapes have always attracted me – especially when they are ‘locked’ into frame by a dark mass. When I inquired about the builder of the craft I learned that it was constructed by a Bass Harbor, Maine fisherman named Clayton Holt in 1949… I have since purchased it from the fisherman that owned it and restored it for my own use.”

Armstrong relocated to Lycoming County near Unityville and continued to paint fields, farms and woods. Many of them were located in the rural landscape of the County, reflecting the beauty of nature, farmland of America, and the simplicity of country living. He died prematurely in his early fifties in 1998.

Board of Governors Update