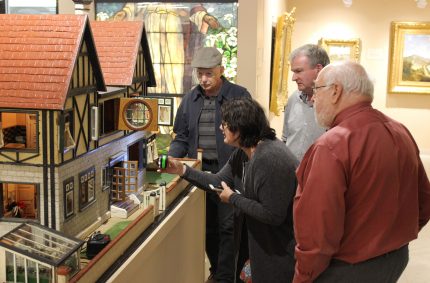 On Monday, October 24, the Manor Hall Dollhouse had visitors. Dr. Nicholas and Mrs. Annette Finnis had traveled from Christ Church, New Zealand with destinations of Nebraska,Philadelphia, Gettysburg and Williamsport. It was a reunion of sorts- Dr. Finnis was here to view the dollhouse built by his grandfather Mowbray Ernest Finnis in the 1930s and given to the museum by Dr. Michael and Mrs.Rickie Gross in 2011. Dr.Finnis had never seen the dollhouse in person, only photographs!

The Manor Hall dollhouse was built circa 1930 byte Reverend Mowbray E. Finnis, Headmaster of a coeducational school in New Zealand. It is based on the Tudor style of architecture which flourished circa 1400-1537, and is characterized by well-defined straight lines, a great Central Hall, and dark timbering. It is built to the scale of 7/8 of an inch to the foot, with dimensions of 3 feet high, 3 feet 9 inches wide, and 2 feet 6 inches deep. 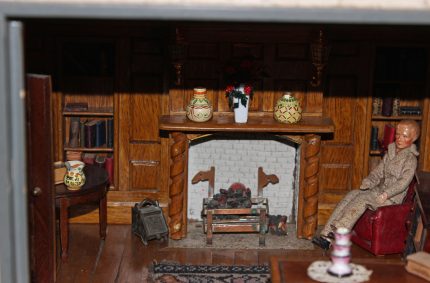 The Central Hall is paneled throughout with over 2,000 pieces of mahogany. All the rooms (except for the baths) have parquet floors and beveled glass windows. The Dining Room impaneled in padouk with an old timbered ceiling, the Drawing Room is half-paneled in mahogany, and the Library is paneled in English Oak. The Kitchen features a parquet floor and blue and white tiled walls. The Bedrooms depict ‘wall’papering techniques, while the Nursery design provides a release for the imagination. The house is outfitted with electricity and has the capacity of running water. The accompanying landscaping is complete with tennis courts, fountains and a greenhouse! 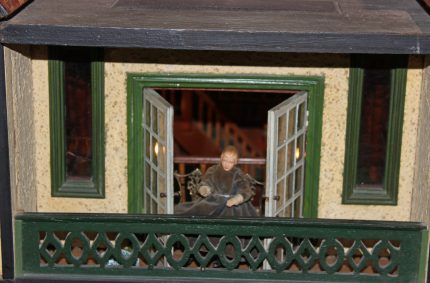 When Reverend Mowbray Finnis returned to his native England, he brought the dollhouse with him. It was exhibited throughout England, primarily in department stores, with the intention to raise monies for children’s hospitals.

The dollhouse was on display at Harrod’s Store in London when the Royal Family, including Princess Elizabeth (later Queen Elizabeth II) and her sister Princess Margaret, came to view it.The dollhouse was auctioned in New York City by the maker’s widow. The buyer was Ruth Gross, who spent the next few years refurbishing and amending the interior of the house. When Mrs. Gross died,the house came into the possession of her son and his wife Dr. Michael and Mrs. Mary (Rickie) Gross of Hughesville, Pennsylvania.

The dollhouse was initially loaned to the Historical Society when it was announced that our Holiday Exhibit would feature dolls and dollhouses. Dr. Gross felt that the house complemented the rich variety of architecture expressed in Williamsport. Ultimately deciding that the dollhouse blended perfectly with ‘Millionaires’ Row’, Dr. & Mrs. Gross donated the dollhouse in 2011.