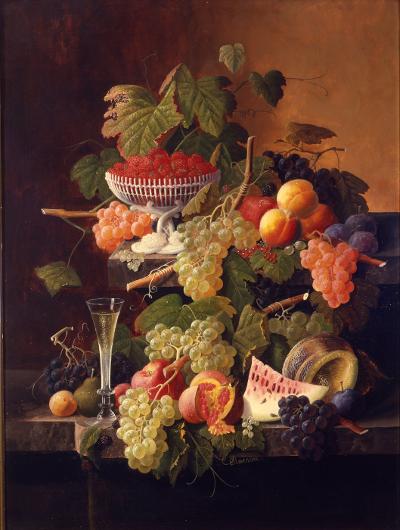 Antiques & Auction News is among the oldest and widest distributed weekly marketplace news publications in the country reporting on auctions, shows, forums, and exhibitions. The publication recently featured an article about the display of a Severin Roesen painting in the Taber Museum. The article is reproduced below:

A Severin Roesen still-life painting, replete with champagne flute and fruit baskets, has been put on display at the Thomas T. Taber Museum of the Lycoming County Historical Society in Williamsport, Pa.

The two-tiered oil on canvas creation measures 40-by-29.24 inches and is on extended loan from area resident Bobby Maguire to honor his parents, Shirley and Jim Maguire, according to museum director Gary Parks.

It is actually the second painting by Roesen recently put on view, joining a similar still life, two tiered but with a water glass rather than flute, this one a gift to the historical society from the children of George R. and Margaret Hays Lamade. Its measurements are nearly the same at 39.6-by-29 inches. Mr. Lamade had been the head of The Grit Publishing Co., founded by his father, Dietrick Lamade. The now-defunct newspaper was once weekly mailed across the country from Williamsport for many years.

The 19th-century Roesens stand out in the realistic illustration of their colorful fruits and flowers, typical of his artistry. Despite detail to his work, Roesen did make near-identical copies of paintings, often simply rearranging elements. The works are on display in the Taber's Fine Arts and Decorative Gallery.

"In the still life loaned by Mr. Maguire, the grapes glisten with drops of dew, slices of watermelon brimming with juice and the champagne flute has bubbles rising to the top," Mr. Parks had told West Branch Life magazine. "His signature 'S Roesen' is cleverly disguised as a grape tendril at the central bottom of the still-life. This will be such an asset to our collection."

It is believed Roesen was born in Prussia, now Germany, in 1815. Working as a porcelain painter, he showed a floral painting at the Cologne Art Club in 1847. He and his wife went to England in 1847 and to New York the following year. He showed 11 paintings at the American Art Union over the next five years and sold his art to private buyers and the Art Union while teaching still-life painting. He then left alone for Pennsylvania in 1857, living in Philadelphia, Harrisburg, Huntingdon, and in 1863, Williamsport.

Numerous paintings of his turned up in the city along the Susquehanna River and were said to sell easily to lumber providers and merchants for their homes, eateries, hotels and taverns. Williamsport was known as a lumber capital because of the vast logging done there while the lumber barons lived in Victorian style homes in a section of town still called Millionaires' Row. Roesen may have given some 50 paintings to Jacob Flock, a brewer and hotel owner, for refreshments and a room. His last dated painting is from 1872, the year he died in Philadelphia.

The man did not become rich from his great artistry, but it did bring some distinction years later when first lady Jacqueline Kennedy decorated one of the White House rooms in the 1960s with two Roesens. According to Mr. Parks, this hiked the price of his works in the marketplace, and many were sold to outsiders by those in Williamsport.

Some 300 of his still-life works, said to model after 17th- and early 18th-century Dutch artistry, have been recorded, but only about two dozen are dated.

While some of his paintings are still in private collections in the Williamsport region, Roesen's works are displayed in the Smithsonian Institution, the National Art Gallery, the Metropolitan Museum of Art, the Museum of Fine Arts in Boston, as well as Detroit, St. Louis, Baltimore, and elsewhere.