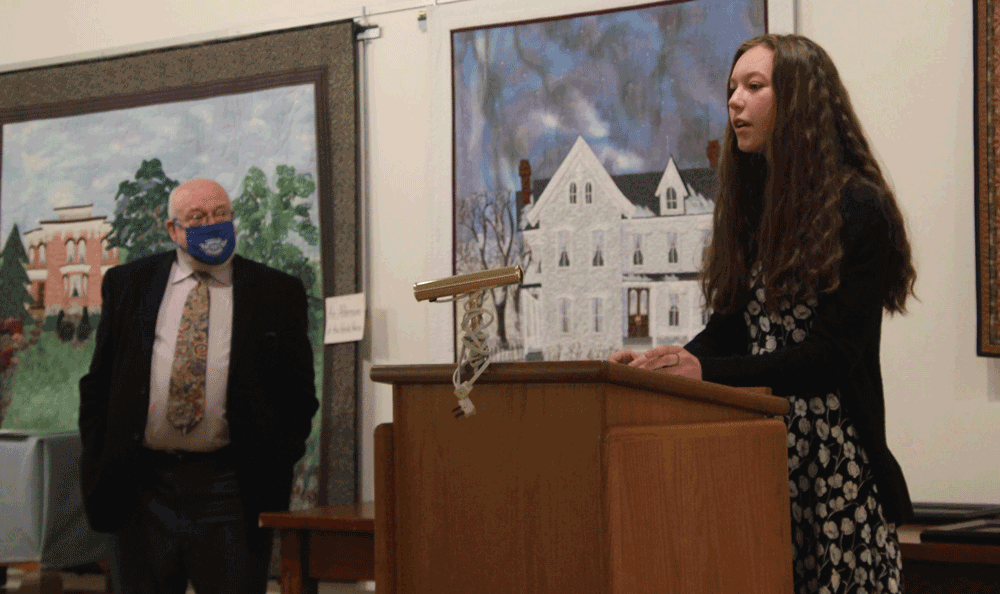 The Richard L. and Miriam L (Swan) Mix Student Historian Award was established in 2016, to recognize the high school senior who submitted the best essay concerning an object in the Taber Museum. The award comes with a $500 prize.

The 2021 winner of the award was announced at the Lycoming County Historical Society's annual meeting on April 25. Montoursville High School Senior Isabella Taylor was named the 2021 Student Historian, for her essay, "The Advancements of Communication Technology Through the Years."

She was in attendance with her parents to receive the award. Isabella was invited to say a few words. She noted that she was told about the contest by Mr. Long, her teacher. After exploring the museum, she was particularly interested in the communication exhibit, and wrote about the development of means of communication from the switchboard on display to today’s smartphones. 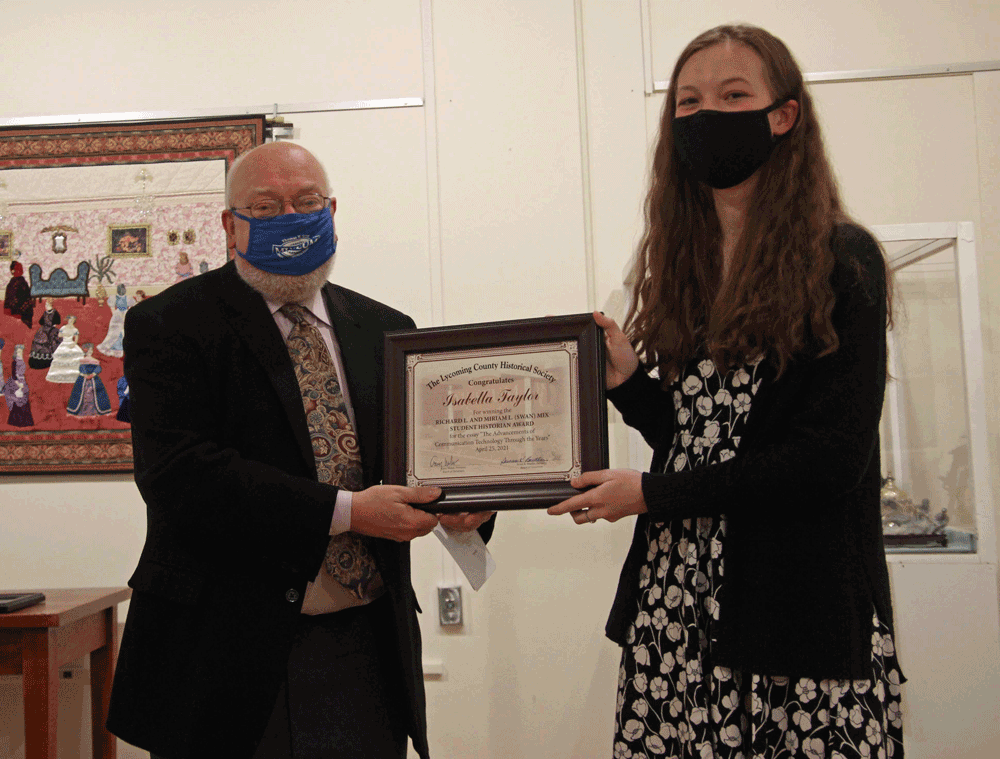 Isabella will graduate in June of 2021. She is planning on attending Lycoming College in the fall to major in Psychology. Her goal is to become a clinical psychologist. She is the youngest of two daughters, and she notes, "I grew up in a creative environment with a mom who teaches art and a dad who has coached Odyssey of the Mind. I enjoy creating art, and I mainly work with watercolor or clay." In school, she participates in the National Art Honor Society, Rho Kappa, Key Club, the National English Honor Society, and the National Honor Society. She is employed at Creekside Country Market.


Congratulations to Isabella Taylor for her achievement. Read her essay below.

When I was young, I never questioned how I was able to make telephone calls, or how I could send text messages. Telecommunication was always something that I took for granted. I knew that it existed, and that was all that mattered to me. My generation grew up with a little device in our back pockets that allowed us to communicate with others in a matter of seconds. With the speed and the accessibility of the internet and communication today, it is hard to imagine a time where a conversation with a friend was not right at our fingertips with the push of a button.

However, communication was not always this fast-paced and advanced. Before the invention of the mobile phone and text messages, people socialized through the telephone. While the older versions of the telephone stimulated speedy conversation in comparison to sending letters through the mail, they were much less efficient than the modern phones. There are a few similarities between the older and modern models of the telephone, but there are countless differences between the two. As the telephone evolved, it developed many new features, making the modern phone almost endlessly useful. Even now, communication technology will continue to evolve. But no matter how advanced this technology is and will be, it can all be traced back to the early models of the telephone and earlier communication machines. The Taber Museum does an excellent job at recounting these machines in their Communications exhibit.

Two notable objects in the exhibit are the rotary dial telephone and the manual switchboard. The rotary dial phone was characterized by its round dial, which had ten holes labeled with letters or numbers. The speaker and microphone were connected by a handle in the middle, and the phone was connected to the base by a cord. These phones were made of metal and plastic materials. This older model of the telephone allowed people to vocally communicate with one another. Often, telephones were connected to party lines, which were lines shared by a number of telephone users from different households.

The switchboard consisted of a large panel with switches, lights, wires, and a multitude of outlets. Each outlet was designated to a different telephone. A switchboard operator would connect callers to the correct telephones by plugging wires into the outlet of the extension the caller was trying to reach. Many extensions were connected to party lines previously mentioned. The manual switchboard was essential to the telephone from the late 1800s until its decline in the late 1900s. Without the switchboard and its operators, it would have been nearly impossible for people to vocally communicate remotely with others.

The technology of the early telephone and switchboards give a lot of insight into the norms of communication and life in the 1900s. There was much less privacy expected when conversing with one another. If one person was taking a call on a party line, another person could listen to the conversation at any time. There was also less of an expectation for speed. While everything is fast-paced today, the pace of everyday life in the past was much slower. The invention and usage of the telephone also suggests that people valued vocal communication and connections with one another. We have always been social beings, but in today’s world we are more likely to favor sending a text message rather than make a call. In this way, we seemingly value convenience and speed over vocal communication.

The old telephone and switchboard have some clear similarities to the modern cellular phone. Both devices allow people to speak to one another over distance. New cell phones still have numbers to dial just as the telephone did. However, there are many differences between the old telephone and the cellular phones we use today. Cellular telephones of today have so many different functions that likely were not even imaginable to people during the time of the original telephones. Their functions extend far past just vocal communication with each other. We can use the modern cellular phone to send text messages in just a few seconds, rather than waiting for a letter to be delivered in the mail. Cellular phones can act as encyclopedias, dictionaries, atlases, and news reporters. They allow us to log into social media platforms, where we can share anything with millions of people. We can access millions of websites at any time we wish. We even use them for recreational purposes, like playing games and listening to music.

These functions of the modern cell phone are especially important in today’s world. The Covid-19 pandemic has challenged our connections with others and the world around us. However, we have persevered with the help of the technology we have available, and we have continued to thrive in many aspects of our lives. In our schooling and our workplace, we have used communication technology in the form of video conferencing through applications such as Zoom and Google Meet. We also use platforms like these to safely reach out to our loved ones. We continue to text and call our friends and family to stay in touch when it was too risky to visit them in person. We keep ourselves updated on current events and the pandemic through news websites we find on the internet. Our society is able to do all of these things on a cell phone.

There are also some physical differences between the rotary dial phone and the modern cellular phone. The rotary dial phone had a physical dial to rotate in order to call a number. The modern cell phone has a screen to tap graphical buttons in order to call a phone number, or in cases of an older cell phone, real buttons to press. Cellular phones today are mobile, meaning they are wireless. They rely on cell towers and signals, rather than switchboards and wires. We can carry them with us wherever we go, instead of being restricted to the length of the cord the telephone is connected to.

The telephone has developed immensely since its invention in 1876 by Alexander Graham Bell. Though the telephone used to be connected to its base by a cord, this design was eventually replaced by the cordless landline phone. The landline phone gave way to the first mobile phone, and the landline phone eventually became obsolete. Then companies raced to make smaller, more compact designs for the mobile phone. The rotary dial was swapped for buttons, which were succeeded by touchscreens. These developments have made our communication technology today more advanced and convenient than ever.

Just as it has for years since its invention, the telephone and communication will continue to develop in the future. Mobile phones will continue to change and become even more compact and convenient. Eventually they will even become obsolete as science makes a path for new technology. We are already seeing smart watches that can take calls from a phone. Maybe someday we will have watches that can take calls on their own, without being connected to a mobile phone. Perhaps these watches will even have the technology to create an augmented reality, allowing us to talk to each other face to face in a way that is unlike current video communication, even from across the world. While it seems like a Sci-fi fantasy, this could even be achieved in the future by projecting holograms. The opportunities for the development of communication technology are endless. Some possibilities may be unfathomable to us now, but with the further development of science and technology, they may be reality in our future.

Abigail Geisinger Speaks at Museum Coffee Hour
‘Mad Hatter’s Tea Party’ recap: What a wonderful event!
Quilts Commemorating World War I And The Quilters Who Made Them
The Taber was at the 2016 Lycoming County Fair . . .