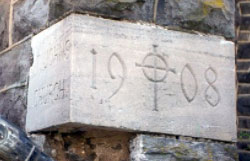 Williamsport- The contents of the cornerstone from the recently-sold Seventh Day Adventist Church in South Williamsport are now on display at the Thomas T. Taber Museum of the Lycoming County Historical Society, 858 West Fourth Street.

“As the cornerstone was ‘unveiled’, it was with great disappointment that we found that water had gotten into the metal box inside the cornerstone. When the box was opened, we found that the contents were damaged,” noted Museum Director Gary Parks, ”In fact, badly ruined.” It is evident that the metal box contained a Bible, hymnal and prayer book, as well as a newspaper, printed materials from the church, and an Indian head penny dating from 1907-1908.

Staff of the Taber Museum allowed the items to slowly dry but the contents are “beyond any conservation efforts”. The materials were housed within the cornerstone, placed there during the construction of a South Williamsport location, a ‘satellite’ of Christ Episcopal Church in Williamsport (1908). It ultimately became known as St. John’s Episcopal Church. The building was acquired by the Seventh Day Adventist Congregation in 1954. The congregation will be relocating to Fleming Street, Williamsport.