Winter 2019-20 Edition of the Journal has Been Released 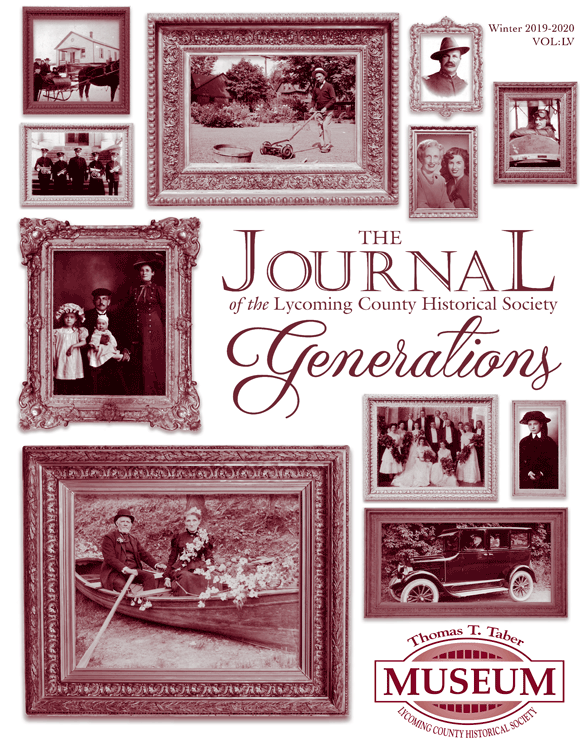 The Winter 2019-20 edition of the Journal of the Lycoming County Historical Society has been released. All members should have received their copies by mail.

The Journal begins with an article concerning many generations removed from the present one. With no known written word, we must rely on the archaeological remnants found to define and interpret the Native American culture that flourished here. Tom ‘Tank’ Baird shares a recent acquisition which answers a few questions, but raises quite a few more. According to Baird, “The Adena were the first long-distance Native American traders. Their homeland would encompass most of present-day Ohio with their spectacular mound and earthworks reaching into West Virginia, Kentucky, Tennessee, Indiana, and smaller sites in western Pennsylvania and New York.” Baird speculates on how the artifacts reached what is now Loganton.

The Journal also celebrate the beginning of the next two hundred fifty years for Muncy Farms, the historic home of Samuel Wallis. It was Wallis who built the original portion of the house in 1769. Many of you may remember it referred to as the ‘Brock Estate’. Mr. & Mrs. Brock were socialites and if the walls could talk, cocktail parties, fashionable soirees and misadventures would be recalled. With the outbreak of World War II and the ‘blitz’ bombings in London, the Barlow children were transported to the safety of the United States and placed in the Brocks’ care. And there they stayed. Karen Kennedy has recorded the fascinating history of the estate, along with Malcolm Barlow’s personal reminiscences.

Diarists fill important gaps in our understanding of past generations. What was important to them fills in the minutiae of everyday life in the County. Martha Lewis Walton Grier Bowen continues her narrative of her life and the lives of her ancestors and relatives in Part II of the transcription of her diary. She recounts meeting the daughter of Governor Simon Snyder with an overly honest summary of the young woman as well as a memorable trip to Philadelphia and the purchase of a bonnet. Her sketches of life in early nineteenth century Lycoming County provide a great source of detail.

Judy Fischer has provided an analysis of yet another diarist, Jennie Sweely, c. 1868. Jennie Sweely served as a teacher at Jefferson School and while very little is revealed of the dynamics between teacher and student, she does reveal that paychecks were sometimes late and extra schooling for the teacher was expected. Details of home life, social activities, and family relationships are detailed within the pages of Jennie’s diary.

This Journal edition, as well as past editions are available in the Museum Store.

Board of Governors Adds Two Members

2020 Lecture Series: A Twist in this Pennsylvania Tale…
Board of Governors Adds Two Members
Low Portrait Restored with Funds From Generous Donors