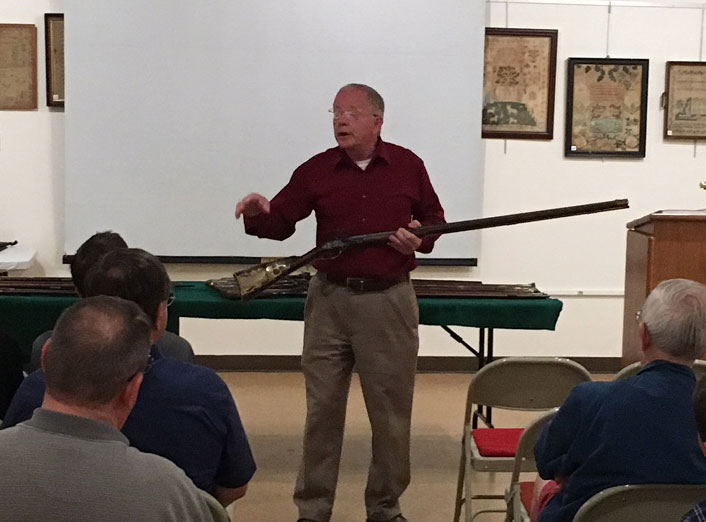 On Sunday, June 16, 2019, the Taber Museum hosted a lecture on the development of the Pennsylvania Long Rifle as produced in the Susquehanna Valley. Rich Nornhold was the guest speaker. Nornhold is a collector and displayed several collector pieces as he spoke about them.

Nornhold, a native of Snyder County, has been studying Pennsylvania long rifles and guns most of his life. He purchased his first gun when he was in high school. His early love of history developed into a teaching career which spanned forty years, teaching history and government studies at Warrior Run High School. As well, he has been associated with the Warrior Run/Fort Freeland Heritage Days Apprenticeship program. He is proficient in mentoring twelve different trades, including coopering.

This Society Program continued a series of lectures which focus on the craftspeople, decorative arts, collections and collecting. As the Society Program coincides with the third Sunday of the month, admission to the museum is free. The museum is open on Sundays from May through the end of October. The Lecture Series combines the Sunday afternoon programs with Thursday morning Coffee Hours. Future talks will feature a lecture on Roan’s Auction and the highlights of its decades-long auctioneering, the treasures which have come from the excavation of a privy pit, and a talk on calligraphy and illuminated manuscripts. The lecture series is generously sponsored by the Woodcock Foundation for the Appreciation of the Arts.