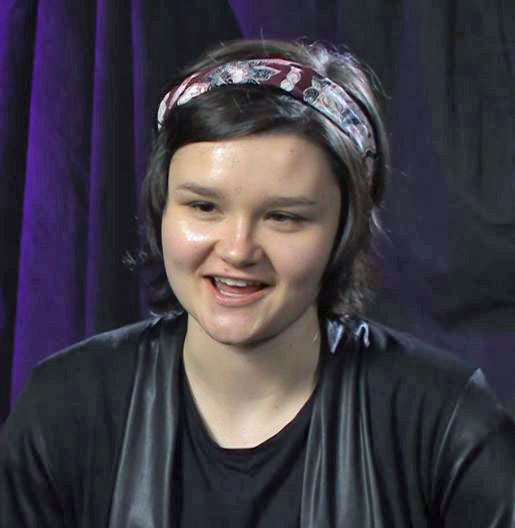 Williamsport High School senior, Juliet Jacques was named winner of the 2018 Richard L. and Miriam L (Swan) Mix Student Historian Award, at the Lycoming County Historical Society Annual Meeting, on April 22. She won the award with an essay entitled Boom and Bust. The essay addressed the boom of the lumbering industry in the Williamsport region and its eventual bust, as reflected in the holdings of the Taber Museum.

The Richard L. and Miriam L (Swan) Mix Student Historian Award was established in 2016, to recognize the high school senior who submitted the best essay concerning an object in the Taber Museum. The winner receives a scholarship in the amount of $500.

My school, Williamsport High School, "home of the Millionaires," has one of the strangest school mascots in the country. (The website Mental Floss ranks us number 14 in the country for "unbelievable high school mascots".) When traveling outside of Williamsport, I always receive weird glances and questions for wearing a school T-shirt with our slogan on it. Living in Williamsport my entire life, I only recently began to think of our mascot and slogan as out of the ordinary. After all, I drive down Millionaires Row on my way to school every day. On this street, where the grandiose mansions of the millionaires still stand, I'm reminded that although the lumber days are long over, the history of Williamsport is still very much alive and embraced.

This history is kept alive in the Taber Museum, which I have visited many times over the years. Recently, as I walked through the large exhibit devoted to the lumber boom, I was again reminded how essential this boom was in shaping Williamsport, in much larger ways than providing a wacky mascot name. According to the Taber Museum, the population of Williamsport grew from 1,615 in 1850, to 16,030 in 1870, due to the popularity and prosperity of the lumber trade. The lumber trade was so profitable that Williamsport boasted more millionaires per person than any other city in the United States. 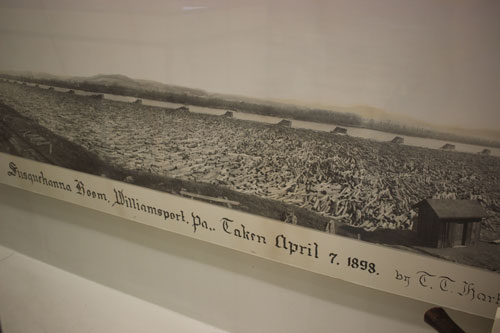 At the museum, the scale model of the Susquehanna Boom demonstrates just how essential Williamsport was to the lumber trade. It puts into perspective the enormous quantity of lumber that came through Williamsport along the Susquehanna River. The boom stretched from Linden to Arch Street, seven miles long. The boom was made of individual cribs, constructed from stone and wood, which helped to store and sort the logs. It acted as a large corral for the logs that were harvested and then floated down the river. Here, workers, called "boom rats" sorted the logs and sent them to the correct saw mill. The boom required many workers and intensive labor.

But the glitz of the lumber boom also had a darker side. The millionaires and lumber barons represented only a very small percent of those involved in the lumber industry. They benefitted at the expense of many workers, who worked long hours for poor wages. In sawmills along the Susquehanna, work days were thirteen hours. Along with the long hours, the work was also dangerous. This was well before the days of workers compensation, and injury and death on the job were risks workers had to take.

The section of the museum dedicated to life and lumber in the 1800s aptly illustrates both sides. Right at the entrance, there is a mural that depicts the Saw Dust War of 1872. The Saw Dust War was a protest by those working on the Susquehanna Boom and was one of the first steps in the long war of labor reform. This serves almost as a caution, reminding us not to get distracted by the opulence of the rich, and to remember the suffering and hardships endured by those in the working class.

Earlier in 1872, Pennsylvania had passed a law mandating an eight-hour work day. However, the legislature provided no way to enforce this law. On the Susquehanna, therefore, workers continued to have up to thirteen-hour work days. The mural depicts protesters in the street, holding signs that say "Ten hours or no saw dust." When their demands were not met, they refused to return to work. The authorities reacted to the strikers by sending in armed troops and militia, also shown in the mural.

The Sawdust War was revolutionary for its time period. The workers were able to unify and stand for what they believed in. They refused to work, and thereby sent a very clear message to the owners of the lumber mills. The public was very sympathetic to their plight, including even Peter Herdic, the lumber millionaire. Although some strikers were sent to jail, citizens on the outside were angry, and the governor even stepped in to grant full pardons.

Since then, labor reform has made huge strides forward. Many laws have been passed providing for better working conditions, such as the child labor laws, and health and safety reform. The eight-hour work day has become standard, and there is a minimum wage. The right to strike is now protected and honored. As working conditions have improved drastically in the past hundred years, in the future they will continue to do so, as long as workers continue to stand up for what they believe in.

Then suddenly, the lumber boom was over and the millionaires were bankrupt. In 1894 a flood devastated the valley, washing away lumber and entire lumber mills. After the construction of new railroad lines, the Susquehanna River was no longer needed to transport the logs. Pennsylvanian forests were largely destroyed and deforested and there was no lumber for the lumber mills. The Susquehanna Boom closed in 1908.

Williamsport recently experienced a modern "boom" with the influx of natural gas companies. For a few years, money flooded in again. Many sold land rights to these companies. There were many jobs created, but unlike during the lumber era, many of these were well-paying and working conditions were much less dangerous. As with the lumber industry, the gas industry required long hours. But this time, the workers were paid overtime. The companies made large profits were made quickly, due to the abundance of natural gas in the Marcellus Shale. But in 2015, many of the companies left the area and left their workers unemployed. Some say the gas industry has already gone bust, although now there is an increase in activity again. Whatever ultimately happens, perhaps someday there will be an exhibit in the Taber Museum on the natural gas boom.

The cycle of boom and bust, the conflict between workers and employers, started with the lumber business in the 1900s and continues in Williamsport and around the country today. When we visit the Taber museum and learn about our history, it is important to consider and compare it to the present. In a hundred years, what topic will students choose for a scholarship essay?