The Winter 2017-18 edition of the Journal of the Lycoming County Historical Society has been issued. All members have received their copy by mail.

This edition of the Journal may be purchased for $7.50 in the online shop.

The Journal features a number of fascinating articles. LCHS Director and Editor Gary Parks, in his forward, describes the edition like this:

As I write this Foreword, Hurricanes Harvey, Irma and Maria have left a path of destruction in Florida, Texas, the Caribbean and Puerto Rico. We can only imagine the heartache that people experienced as they lost loved ones and their pets, their homes, and their possessions. Wildfires raged in California and earthquakes shattered California and Japan. 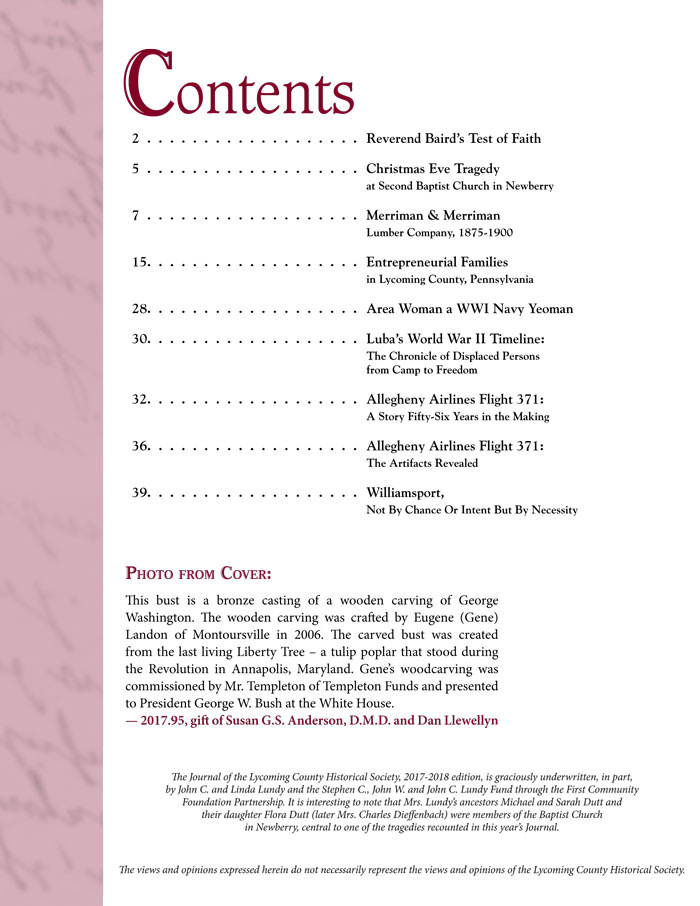 What survives? The indomitable human spirit which brings about rebuilding, going on and bravely facing life’s challenges, and memorializing those who are no longer with us. The articles in this year’s journal pay tribute to the tragedies of life and the spirit with which people ultimately triumph. As George Washington wrote to John Armstrong in 1781, “We should not look back unless it is to derive useful lessons from past errors, and for the purpose of profiting by dearly bought experience.”

Many Lycoming Countians remember the tragic crash of Allegheny Flight #371 which took the lives of everyone aboard except a sole survivor. Robin Van Auken has recounted the events of that fateful day in 1959. Decades later, Shane Collins and his cousin Mark Avery took it upon themselves to find the crash site. Not knowing what they would encounter, they recovered fragments of the crash, including poignant mementoes of the lost lives. Thanks to the efforts of these awesome archaeologists, a plaque has been placed at the crash site so that we will not forget. Someday, we hope to exhibit the artifacts at the Lycoming County Historical Society.

Stories of triumph exist within John Piper’s treatise of five families who established businesses within Lycoming County. Through their tenacity and hard work, the businesses have not only survived, but flourished. The Van Campens, the Plankenhorns, the Spitlers, the Lundys and the Staimans are highlighted in this issue of the Journal. Ali Preston has added a history of Merriman and Merriman Lumber Company as an example of a successful company during the Lumber Boom. Though considered a small lumber company, the huge impact it had throughout the continent is revealed. Blanche Miller Grimes, a Navy yeoman during World War I, was certainly ahead of her time, triumphing amidst a majority of men. Reverend William S. Baird survived the death of three children bolstered by his great faith. Momentarily defeated, the Baptists in Newberry rebuilt after the church balcony collapsed in a Christmas Eve tragedy. The Ochejs, displaced during World War II, spent many years in displaced persons camps before receiving the opportunity of passage to America and ultimately, enjoying the American dream.

As a leit motif, a small remembrance of the devastation created by Hurricane Agnes in 1972 is included. As we remember the flooding which occurred forty-six years ago, Stephen Wasby of Eastham, Massachusetts, contacted us just at the right time. Even though it is apparent that he was marooned in nearby Lock Haven during Hurricane Agnes, the message is reinforced, that the best in human beings arises during crisis. We pull together and help one another through difficult times.

I sincerely hope you enjoy reading these articles!