General ‘Black Jack” Pershing was a key figure in World War I. He was a senior United States Army officer. His most famous post was as the commander of the American Expeditionary Force (AEF) on the Western Front in World War I, 1917–18. Pershing is the only American to be promoted in his own lifetime to General of the Armies rank, the highest possible rank in the United States Army. 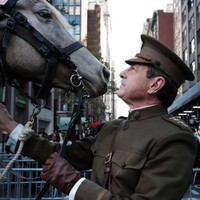 Reenactor Shuey's approach was to provide a personal, first-person presentation with interesting facts along with a message which are intended to be both informative and inspiring."‘Pershing - Generally Speaking’ is my most passionate and thoroughly researched portrayal to date. We have a great opportunity to educate as we commemorate the 100th Anniversary of our nation’s participation in ending the war and winning peace for the world."

Shuey told Pershing's story in his voice with drama, humor, authenticity and reverence for his memory and the brave American veterans who served with him, who have gone before him and since.

An audience of fifty-one enjoyed the presentation.

The Society Program continues a series of lectures which focus on the era of World War I. As the Society Program coincides with the third Sunday of the month, admission to the museum is free. The museum is now open on Sundays from May through the end of October. The Lecture Series combines the Sunday afternoon programs with Thursday morning Coffee Hours. Future talks will feature an appearance by Abigail Geisinger speaking on Geisinger Hospital’s use as a World War I hospital, the River Valley Quintet performing the music of Irving Berlin and George M. Cohan, and a lecture on aviation during World War I by William E. Fischer, Jr., U.S. Air Force (retired).

Quilts Commemorating World War I And The Quilters Who Made Them