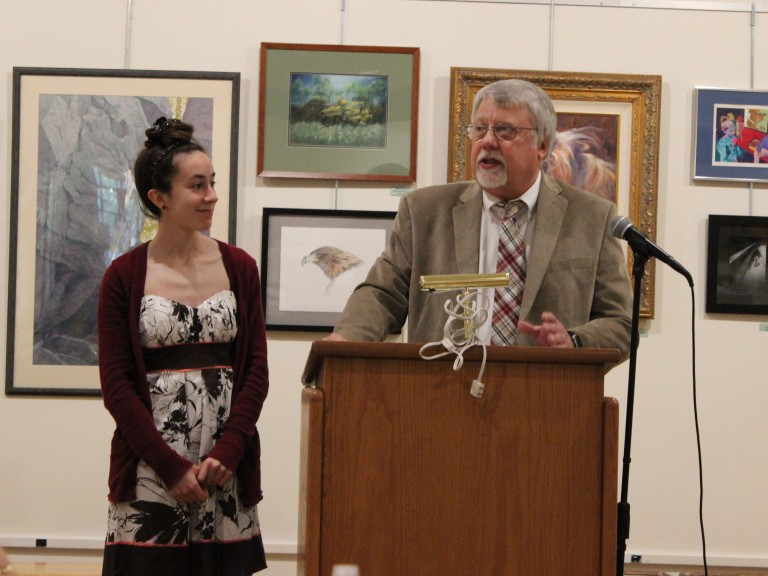 Education of our young people is one of the goals of the Lycoming County Historical Society. To that end, several years ago the Society established a yearly award for a local “student historian.”

Lauren Brandenburg, a senior at Loyalsock High School, was named the winner of the 2016 Student Historian Award. The award was presented by former Board President John Raymond, at the 2016 Society annual meeting. Lauren was given a certificate and a $500 prize. 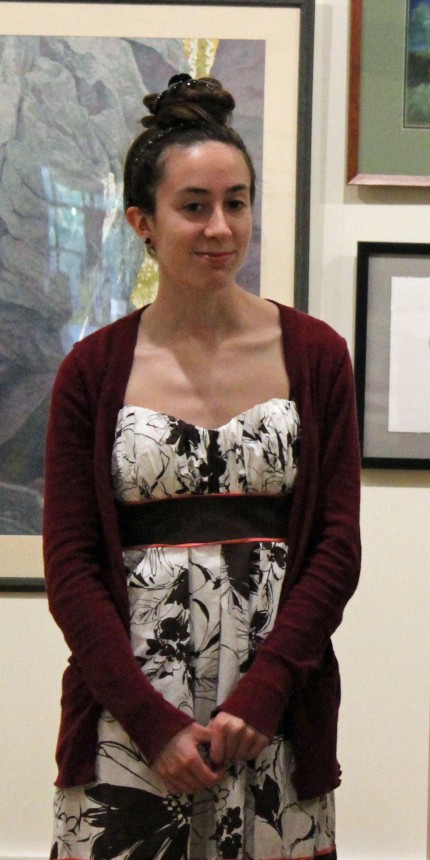 John Raymond also announced that the award was renamed in honor of local historians Richard L. and Miriam L. Swan Mix. Both were teachers, authors and speakers on Lycoming County history, as well as active volunteers with the Society and in the community, who advocated for the preservation of local history. Richard died in February of this year. Miriam died in 2008.

Entrants in the Student Historian contest wrote a paper, focused on the topic, “The Taber-Today and Tomorrow” and answered the question ‘How is the past (as displayed at the Taber Museum) connected to the present and to the future?” The student was required to view an object or exhibit within the museum and respond to several questions concerning the composition of the object, if there is a counterpart in use today, and do the objects differ and how are they similar?

Lauren’s presentation, “ One-Stop Shop,” was selected by a team of museum judges, from nine entries submitted by local high school seniors. She wrote on the Ralston General Store exhibit, comparing the store to its current counterpart, WalMart. (Read the Essay below)

Here is the winning essay: 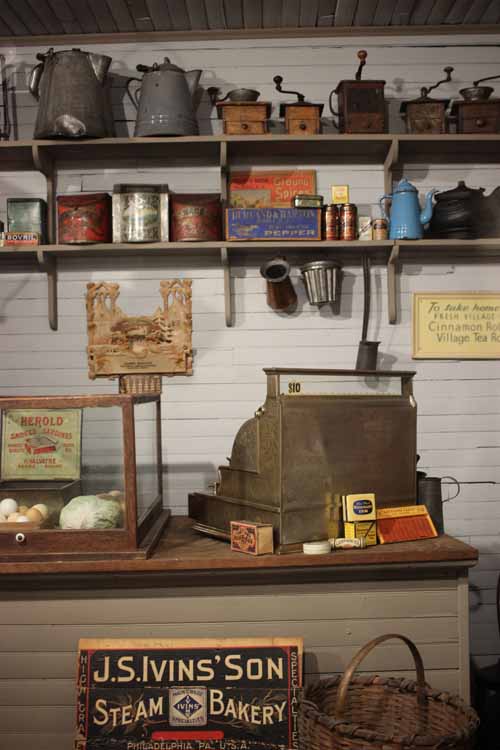 I visited the Taber Museum in March, for the first time in many years. I had been in for a school field trip or some such outing in elementary school. My most recent visit, however, allowed me to understand and comprehend much more of what the Taber has to offer. One exhibit caught my eye during my self-guided tour – an old-fashioned, glasspaned storefront with lettering over the door spelling “J. Maggio. General Merchandise. Ralston, PA.” A mannequin, dressed in period clothes, mans the inside counter. I feel this exhibit has a strong historical background, but also can be related to the present, and even the future.

The Ralston General Store exhibit displays the glass-paned storefront of a mining town’s general store. Through the glass, items that would have been sold are displayed on shelves. Groceries, machine parts, tools, clothes, lamps, kitchen ware, anything a person would need, all was sold here. A town’s general store was a vital establishment. In small, isolated towns, larger stores may be unreachable or impractical to visit on a regular basis; the general store, then, supplied the residents’ needs if they couldn’t reach a larger one. For example, the Ralston General Store was originally opened by Mr. Leonard because the roads between Ralston and Elmira or Williamsport were unpaved, making travel to the stores in those towns difficult. The store also served as a meeting-place and hangout spot for villagers. Men would loiter and chew tobacco and talk on the front porch. Here was where information was learned and gossip was shared.

Any culture or period can be defined by the structures they built. Rural America in the early 20th century is no exception. The entire focus of the town of Ralston was the coal mine. The tipple was built for the coal. The coal was the reason for the location of the town (close to a vein) and the people who filled it (the miners and their families). The mine dictated who and where, but the other structures built in town, like churches and stores, represented the culture of the people. The general store represents their way of life and their culture outside of the coal mine. The store would bring in goods from miles around, and the townspeople would trade products from their farms or wages from the mine. Life was a lot simpler then–if you need something, make it yourself, or head on down to the general store. The products actually sold in the store also tell us about life in the past. A poster for Ayer’s Sarsaparilla hangs on the wall, advertising its abilities to “make the weak strong”; this was a time before advertising regulations. A crate sports the label “Williamsport Bakery” and carried “fine crackers and cakes”. There are tins of chewing tobacco, extremely popular in 19th and 20th centuries America. A scale sits on the counter for weighing products sold by mass. These goods are the equivalent to our modern Coca-Cola, prepackaged bread, and perhaps Tastycakes or Twinkies. Chewing tobacco is still in use, but not nearly as popular due to health concerns.

The modern counterpart to the general store model seems to be the supercenters that America has come to love. It’s a building where anything a family might need can be purchased, all under one roof. The modern Walmart chain fits the bill. Clothes, shoes, tools, food, cosmetics, toiletries, electronics, plants, toys, all can be obtained at a local Walmart, present in nearly every town. The chain allows global goods to be accessible to any American, just as its predecessor brought out-of-reach products to small-town, rural America.

The general store of the late 1800s to mid-1900s was owned and operated by local citizens. It served a small community what it needed to live. The giant corporations that run today’s “general stores” are not local, not small, and not friendly with the citizens of the towns they serve. They operate on a gigantic scale, selling products from the US and around the world. The variety of products sold is much, much larger than the local general store.

Walmart probably isn’t going anywhere for a while. However, with the rise of online shopping, practically any product in the world is available for delivery right to your doorstep. The new “general store” becomes the Amazon or Ebay, where products that normally are not accessible become readily available. These online shopping giants have widened the field even further. Books, electronics, any name brand of clothing, houseware, machine parts, furniture, and office supplies can be brought to the door; the possibilities are endless.

With the increasing globalization of our economy, the variety and availability of products is sure to grow. Online shopping and in-store options will continue to expand. Shoppers still like the convenience of finding everything in one place, whether on Amazon.com or the old glass-fronted J. Maggio General Merchandise.

Volunteer of the Year: Glenn Williams

Life and Times of Prince Farrington Celebrated at CasinoEvil