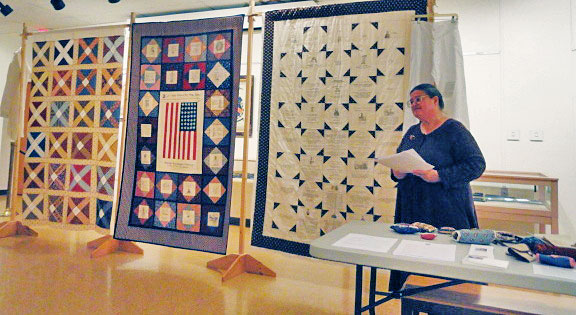 The Thomas T. Taber Museum of the Lycoming County Historical Society was pleased to present Ann Diseroad on Sunday, August 19 at 2 pm. She spoke on Ladies’ Aid Societies of the Civil War Era and their efforts to raise money through the production of quilts and other textiles. The program was free and open to the public. It was one in a series of lectures which highlight the Civil War, combining the museum’s coffee hours and Society Programs.

Ann F. Diseroad is a retired librarian and local historian in Bloomsburg, Pennsylvania. She serves on the board of the Columbia County Historical and Genealogical Society, was a member of the Selection Committee for “Pennsylvania Quilts: Studies in Color,” the highly acclaimed quilt show held at the Packwood House Museum, Lewisburg, Pennsylvania in 2009, and works with the Barton House at the Bloomsburg Fair to provide a living history experience for visitors. Her lectures, workshops, articles and cemetery tours have a popular following. She is one of twelve artisans nationwide who will participate in creating textiles for the Robert E. Lee House in Arlington, Virginia.

When President Abraham Lincoln issued his call for 75,000 troops in April of 1861, the United States standing army had never numbered more than 15,000. The Federal Government was incapable of provisioning a force as large as the one assembled. Spontaneously, women throughout Pennsylvania and across the nation rose to meet the challenge, collecting supplies and money and producing materials needed to equip the Union Army.

Ultimately as many as 10,000 Ladies Aid Societies were united under the umbrella of the United States Sanitary Commission, a civilian organization which provided food, clothing and medical supplies to Union soldiers, easily worth millions of dollars. Their support not only contributed to soldiers’ comfort but significantly reduced loss of life.

This presentation told the story of women’s efforts drawn from Civil War era newspapers, diaries, letters and other contemporary sources. On display were Ann’s reproductions of many items produced by Civil War women including quilts, hospital garments and knitwear, made from period instructions or based on photographs of surviving objects. This collection is probably the most diverse and complete one of its type.