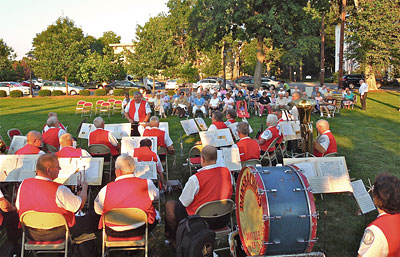 The Thomas T. Taber Museum of the Lycoming County Historical Society hosted ‘The Dansbachers’, a musical group that specializes in German oompah and polkas, in the Victorian gardens of the museum, Thursday, August 23, 2012. The concert was sponsored by W.R. Sims Insurance Agency of Williamsport.

The ‘Dansbachers’ are centered in Danville, formed from the Danville Legion Band. They play extensively in central Pennsylvania, delighting audiences with their blend of familiar tunes, including the often-requested ‘Pennsylvania Polka’.

Following the concert, an old-fashioned ice cream social was held with ice cream graciously donated by Schneider Valley Farms. A crowd of over one hundred people enjoyed the beautiful weather and free ice cream.

Before the concert, Boy Scouts of Troop 12 weeded, raked mulch, clipped bushes, and conveyed chairs and tables for the concert.

Nineteenth Century Bottles Topic of Conversation at the Taber