Nineteenth Century Bottles Topic of Conversation at the Taber 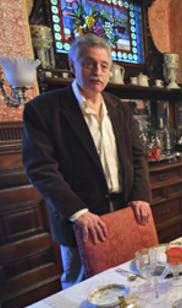 The Thomas T. Taber Museum of the Lycoming County Historical Society hosted Bob Kane, Jr., at its September Coffee Hour on Thursday, September 13 in its community room. He spoke on nineteenth century bottles from Williamsport and surrounding areas. Combining the Thursday morning Coffee Hours with its Sunday afternoon Society Programs, the Lecture Series explored aspects of the nineteenth century and the U.S. Civil War.

Bob Kane, Jr., a native of Williamsport, is a noted collector and architectural aficionado. He has served as a consultant in many restorations throughout the city of Williamsport, including the Rowley House, for which he currently serves as Curator. He has previously served as President of the Board of Governors of the Lycoming County Historical Society and as chairman of the Society’s collections and personnel committees. Bob serves as a Board member of Preservation Williamsport and as Chairman of the Historic Architectural Review Board for the City of Williamsport. Bob is President of the Susquehanna Regional Medical Services Corporation and is President and CEO of Divine Providence Hospital. In his spare time, Bob collects memorabilia relating to the history of Williamsport and Lycoming County. A favorite past-time is to exhume the discarded contents of nineteenth century privy pits which often include 19th century bottles, crockery, marbles, and ceramics.

Peter Tomasak, Co-Author of ‘The Fishing Creek Confederacy: A Story Of Civil War Draft Resistance’ speaks at the Taber