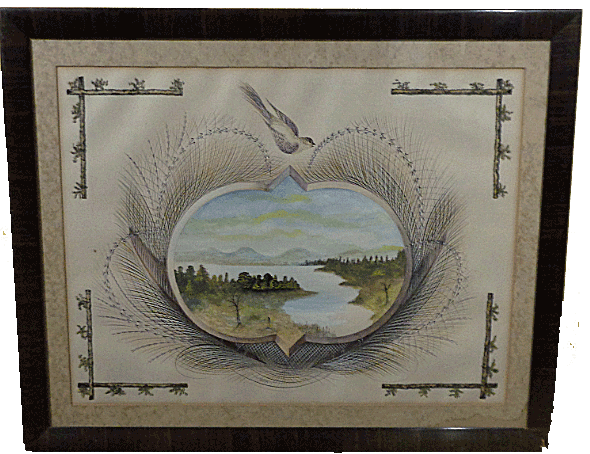 Among the many treasures within the Lycoming County Historical Society are a number of examples of the work of Clarence C. Hart. He elevated penmanship to a work of art with swirls and flourishes, often with a miniature landscape embellished with watercolor.

Clarence Charles Hart taught at the Williamsport Commercial College for twenty-four years. In addition to teaching, Hart hand-lettered hundreds of diplomas awarded by the Williamsport High School and schools in the surrounding communities of Ralston, Hughesville, Jersey Shore, Muncy and Montgomery.

Hart was born in Nauvoo, Tioga County, Pennsylvania on March 14, 1858, the son of Charles Cochran and Rachael (Springer) Hart. An avid interest in penmanship secured Clarence Hart an award for the best penmanship in Tioga County at aged fourteen. Hart taught school in area schools for four years before entering the Commercial College in Elmira, New York. As he recalls in an article in the Grit newspaper, May 10, 1936, he “ taught penmanship in a dozen or more [schools] in the State [of New York]” before coming to the Williamsport Commercial College. It is certain that Hart was instructing students in the ‘Spencerian Method’ which was developed by the ‘Father of American Penmanship’ Platt Rogers Spencer and taught widely throughout schools until the mid 1920s, and the Palmer Method, popular among businesses and developed by A.N. Palmer.

Clarence Hart rewarded his students who turned out to be the best penmen with an oil painting. Talented at teaching and popular with his students, Mr. Hart was an accomplished oil painter and photographer. His panoramic view of the Susquehanna Log Boom may be viewed in the Taber Museum’s logging and lumbering gallery.

Our school curriculum, ever changing, has de-emphasized handwriting skills and penmanship has been replaced with (virtually-extinct) typewriters, computers, and texting.