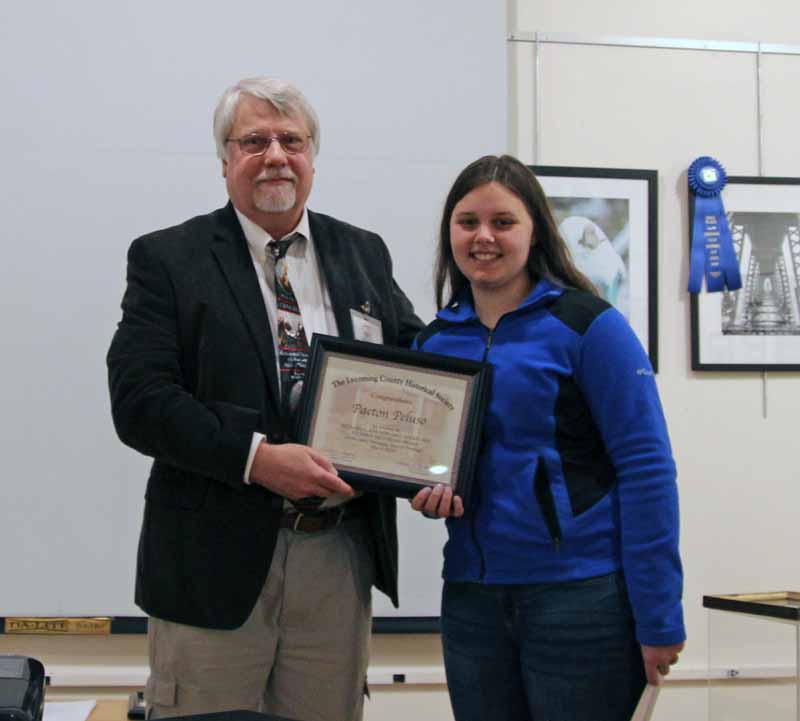 Raymond reviewed the topics of past essays in this contest and remarked how almost anything in the museum can spark interest. He introduced Paeton Peluso as the 2019 winner of the $500 prize. Her essay, “Sweeping Away to Nothing” focused on the broom making exhibit and how the lowly broom has developed into the Roomba robotic vacuum cleaners today.

She will matriculate at Lycoming College in the fall with plans to become a veterinarian.

Congratulations to Paeton. Her essay - read on!

Sweeping Away to Nothing - by Paeton Peluso

Many people tend to take the simple materials in life for granted. An object as simple as a broom was once seen useful accommodation within one’s home in order to complete chores quicker and easier. Brooms in Williamsport were made in a specific way from the Liddic family. Great importance arose from this new invention. In today’s modern homes, cleaning supplies, such as vacuums and Swiffer Wet Jets, are more common than brooms. The future may end up affecting the usage of brooms.

Before brooms came along, cleaning stones and dirt from cabins and homes would have been a time consuming chore. Since cooking still took place outside, the hearth needed to be kept clean from ashes that were carried out; therefore, dust and ashes were apart of the lifestyle (Lowder 2012). Dust being inhaled can cause sickness, and disease.

In 1873, Jacob Liddic started a broom making business in Williamsport. This process carried down to his three sons, John, Walter, and William, and his three grandsons, William, Vern, and Howard. Due to being one of the only businesses in the area, the men were very profitable. In the 1960s, the business died out, most likely due to newer inventions, such as vacuums with carpets and mops with hard floors.

The broom making process began with common materials that were then used in different machines. Instead of twigs, farmers discovered a plant called broomcorn that could be used because of its strength, flexibility, and cost effectiveness, hence how the name” broom” originated. After the stalks grew to ten feet, they would be soaked in water. The first machine was called the broomcorn cleaner. The broomcorn needed all the seeds removed, while the stalks were straightened. This allowed for the finished broom to have a presentable appearance. Next, the winder attached five layers of stalks to the handle of wood by wire. The broom press would then simply press together the layers, to then be stitched by hand, resulting in a signature on every individual broom. Finally, the straw cutter would cut the ends to make a nice appearance for selling and within the home.

Having the cleaning tool of a broom was a nice essential for any home or business. The broom had a nice appearance, with the neat cut ends and straightened stalks. This tool even helped with home appearance. In addition to appearance, the straight cut edges would allow for the broom to stand on its own, allowing for less room to be taken up within the older, smaller homes. The machines to make the broom would have been made of wood, steel, and iron, in order for the broom to have a clean appearance.

Brooms, as we know today, are made for sweeping floors and porches, but in the 1800s and 1900s, brooms were of much more importance. Brooms were used to sweep away dirt, dust, stones, and any other unwanted contaminants that entered a home. Brooms also become an alternative for rakes, and people could easily sweep leaves. Plus, cooking outside meant ashes could become a mess. A broom allowed for ashes to be swept easily out of the way.

The creation of the broom resembles an era of hygiene. Before the 1960’s, women were in charge of cleaning the home, raising the children, and cooking. Cleaning the body and clothes was an important part with daily life, but in order keep clean, the house also needed to stay clean.

Each has a very important job within cleaning the house, which is one of their only similarities. The broom, mop, and Swiffer Wet Jet are all cleaning tools, but they all have different cleaning capabilities.

Brooms, mops, and Swiffer Wet Jets have a lot of differences. Brooms become brittle after time, so they need to be replaced often, unlike mops, which are made of fabric and can be cleaned thoroughly. Also, Swiffer Wet Jets only require the mop piece to be replaced. Sweeping with a broom can only get the larger pieces of dirt, whereas the other two cleaning tools use water and soap to thoroughly clean and pick up a majority of particles. Moreover, each tool contains different materials, and as mentioned before, the water and soap are able to soaked up within the cloth of mops and pads of Swiffer Wet Jets. The broom has a specific process for manufacturing, which was a homemade business, so each was individually crafted. Swiffer Wet Jets are created in a factory, where multiples can also be processed at the same time.

Before factories became popular, most products had to handmade. Brooms went through a drawn out process with multiple machines that needed to be manually controlled, resulting in a longer time for manufacturing. Also, brooms were crafted from materials that require work for gathering supplies, such as wood and broomcorn stalks. In a factory, the plastic materials are easier to get ahold of and place together. The factory process can produce a lot more items in a faster amount of time.

As cleaning continues to evolve, greater creations continue to become more available. One of the most recent achievements is the creation of robots. Robots are continuing to advance within automotives, teaching, cleaning, cooking, factories, and businesses, such as Giant Food Store. With brooms becoming in less demand over the years, the possibility of brooms going “extinct” is a very real possibility.

Along with the newer generation, a large problem is plastic pollution. Brooms are now produced in factories, which let alone causes a lot of chemical pollution. Although plastic pollution is mainly caused by bottles and straws, brooms are still created from plastic products. Robots, could help this plastic issue, but the history of the broom will fade away, just as the cotton gin and hearths.

In the 1800s, a broom was considered a great addition to have, but there is a chance of brooms becoming a thing of the past. The broom making process was a long, specialized process that came to Williamsport in 1873 from the Liddic family. Now newer advancements are taking over the simple broom with Swiffer Wet Jets and robots being produced in factories.