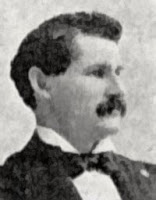 Forty-five guests attended the talk. Along with the enlightening presentation, those in attendance sang some of Black’s tunes, to the accompaniment of pianist Debbie Keller.

James Milton Black (1856-1938) was a layperson who saw how powerful music could be in its utilization in spreading the gospel. During his lifetime, he composed music for approximately one hundred eighty hymns, the words written by local Williamsport residents and ministers of the day. Black is best known for authoring the words and composing the music for the popular gospel song When the Roll is Called Up Yonder.

The Coffee Hour kicked off the lecture series of 2016 which will explore the musical heritage of Lycoming County and central Pennsylvania. Other scheduled activities include a concert of logging and lumbering songs by Van Wagner and a talk about Ole Bull and his violin playing by Mary Hirst of the Ole Bull State Park. As well, concerts by an ensemble drawn from the Repasz Band (with a history of the band given by conductor Al Nacinovich) and the Gesang Verain Harmonia Club are in the process of being finalized. The Lecture Series combines Thursday morning Coffee Hours at 10am (second Thursdays of months March-June, September-December) and Society Programs at 2pm (third Sundays of months May-October).

New to the Twentieth Century Exhibit!