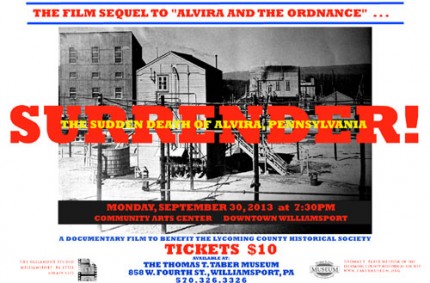 In 1942, after America entered World War II, its citizens were asked to sacrifice much for the war effort. Gasoline, sugar, butter and silk were rationed and entire communities rallied behind scrap and tire drives. One community, however, sacrificed much more: The entire village of Alvira walked from their homes and farms in the shadow of smoke and flames. Seized by the U.S. War Department by eminent domain, Alvira was bulldozed and burned and became part of an 8,500-acre secret government complex that manufactured explosives.

Photographs and deeds, diaries and receipts are all that remain, except for the memories of its residents, kept alive through oral tradition.

LCHS members Steve and Martha Huddy (as the Vallamont Studio) have produced the documentary film, Surrender! The Sudden Death of Alvira, Pennsylvania as a sequel to the local history book, Alvira and the Ordnance: An American Dream…Denied. The film premiered Monday, September 30 at the Community Arts Center, in Williamsport.

The show was very well attended, with most seats taken, in the very large facility. The proceeds were donated to the Lycoming County Historical Society, primarily to facilitate the education of children.