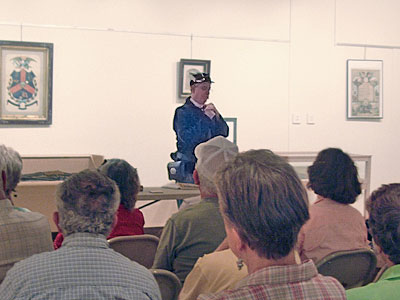 The Thomas T. Taber Museum of the Lycoming County Historical Society hosted its Society Program on Sunday, July 15 at 2 pm, featuring John Lee, who portrayed Civil War Chaplain McCormick, of the Pennsylvania Bucktails. The Bucktails, of course, consisted of many men from the central Pennsylvania region. John Lee is a (recently) retired Methodist minister who has studied the life of Chaplain McCormick to develop his Civil War persona.

Combining the Thursday morning Coffee Hours with its Sunday afternoon Society Programs, the Lecture Series explored aspects of the U.S. Civil War. Historical organizations throughout the country were honoring the 150th anniversary of the Civil War, which began in 1861 and ended in 1865.