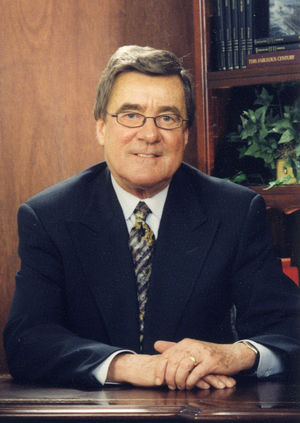 On June 19, 2016 the Taber Museum presented a lecture by Dr. Oscar Knade on the tremendous impact of Dr. Kenneth Raessler on the musical program of the Williamsport Area School District, bringing it to national attention and excellence.

Dr. Raessler was a graduate of West Chester University, additionally receiving his Master of Music Education from Temple University and his PhD from Michigan State University. He achieved national prominence during his tenure as the Director of Music for the school district, not only promoting excellence in performance but also for excellence and innovation in classroom music. Williamsport has been recognized as One of the Best Communities for Music Education for a consistent number of years by the American Music Conference- National Association of Music Merchants and Williamsport Area High School has consistently been chosen as a semi-finalist or finalist as a Grammy Signature School. Dr. Raessler’s book, Aspiring to Excel: Leadership Initiatives for Music Educators is accepted as a classic textbook in the field. The Lycoming County Historical Society was given Dr. Reassler’s archival materials prior to his death in 2015. A number of the materials will be on display for the afternoon lecture.

Dr. Knade was named superintendent of the Williamsport Area School District in 1972, serving in the position until 1992. Dr. Knade is a graduate of West Chester University. He received his master’s and doctorate from Temple University in educational administration. The two men worked closely during their tenure in Williamsport, forming a professional and personal bond that would only be broken with Dr. Raessler’s death.

The lecture was part of the year-long series exploring the musical heritage of central Pennsylvania. It is sponsored by the Woodcock Foundation for the Appreciation of the Arts, Inc. and Hudock Capital.

YesterShoppe held at the Taber Museum on June 4, 2016