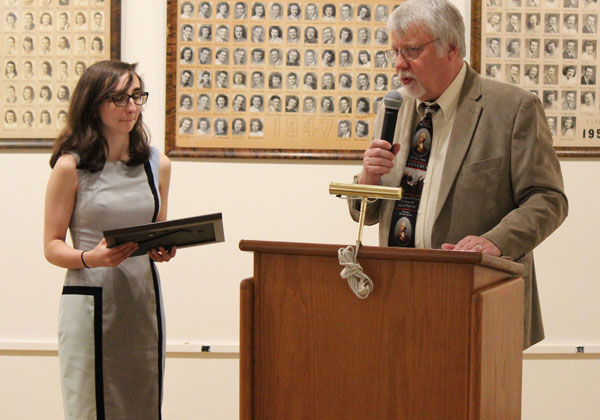 The Richard L. and Miriam L (Swan) Mix Student Historian Award was established in 2016, to recognize the high school senior who submitted the best essay concerning an object in the Taber Museum. The award comes with a $500 prize.

The 2017 award winner was announced by Board Member John Raymond at Annual Meeting of the Historical Society on April 23. Beatrice Ferguson of Jersey Shore High School prevailed over a number of entrants with her essay, The Apple Cider Press.

Congratulations to Beatrice. Her essay follows. 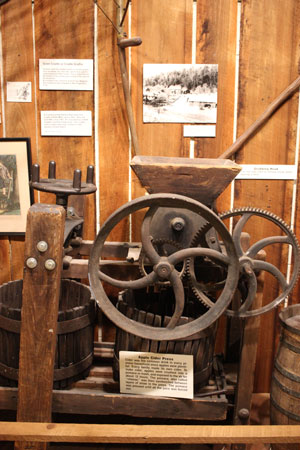 On a crisp, fall day, when the wind is blustery and the sky is a low, pale grey, there is nothing I long for more than a tall glass of apple cider. I savor the saccharine taste and satisfying freshness, often pouring a glass after an afternoon run or a hike under the fall leaves. Thus, when I entered the Taber Museum, I paused when I saw an apple cider press. It was a bulky machine, composed of metal gears, spiraling wheels, a crank, and thick planks of darkened wood. Upon seeing the machine, it occurred to me that I had never considered where, or how, the apple cider I thought of as a seasonal staple, was produced. The same could be said of many other foods, their origins and production are a mystery to myself and many other consumers in modern society. Contrastingly, for pioneer families in the 1800s, the production of food was entirely transparent, for it took place within the household (“Apple Cider Press”). The wood and metal apple cider press thus reflects a trend that courses its way through history. Slowly but insistently, food production left the home and moved to factories and production plants far away.

In the pioneer households in which the apple cider press was used, food production was concentrated almost entirely in the home. This was out of necessity. Pioneer families lived in isolated, rural environments, and could not rely on goods produced by others. Sustenance was subsequently drawn from the vast swaths of natural resources around them. Game was hunted and fruits, berries, and seeds were scavenged. Flax was ground with spinning wheels into a crude grain dish and small greens like wild mustard were collected, boiled, and eaten (Havighurst). The apple cider press was utilized to provide an easily accessible beverage, as apples were common. To use it, apples were collected and crushed into a lumpy mash. This mash, after being exposed to air for a period of time, was squeezed with the apple cider press. This expelled juice into wooden buckets placed below (“Apple Cider Press”).

As technology improved and the practices of the present day crystallized, food production left the household. The apple cider press seen at the Taber Museum, that of pioneer families, was most prevalent during the early to mid-1800s, as pioneer families streamed westward in search of new farmland, economic opportunity, and adventure (Kennedy & Cohen 276-277). Other apple cider presses however, existed in the Eastern United States, often on a larger scale. With the aid of horse powered mills, apple cider was produced and sold to townspeople (“Apple Cider, Apple Butter, Perry, and Vinegar”). Soon, however, the humans and horses that had cranked the wheels of apple cider presses were no longer needed in the same capacity. Mechanization seized the process in its entirety. In the post-World War II economic boom of the 1950s especially, small family operated farms decreased in prevalence. Agriculture became an industry dominated by big businesses and new, more efficient machinery, like air conditioned tractors. The creation of food products from these agricultural goods became similarly controlled by big businesses and mechanized (Kennedy & Cohen 830-835). This has brought food production to the place it is today. Now, raw goods are supplied by large agribusinesses, processed, packaged, and sold to consumers at grocery stores. Ready to eat meals, canned soups, pre-packaged snacks, and other foods, can be purchased easily and require little, if any, preparation on the behalf of the consumer. Consumers desire the convenience and taste of these pre-packaged foods and the industries that create these products are momentously successfully. The production and prevalence of apple cider is indicative of this. Apple cider is rarely seen in grocery stores. In its place is a similar beverage, apple juice. Apple juice is clear, while cider is cloudy, and it is extensively processed.

To make apple juice, apples are washed and mashed mechanically. The mash is squeezed with a hydraulic press. The juice is then filtered, removing the particles that make apple cider cloudy. Pasteurization occurs shortly thereafter, a process in which the juice is heated to a certain temperature for a specified amount of time, in order to kill bacteria. For example, the US Food and Drug Administration, recommends that apple juice be heated to 160 degrees Fahrenheit for at least 6 seconds (“FDA Recommended Pasteurization Time/Temperatures”). Following the extensive process, apple juice is sealed and transported to grocery stores (“Apple Juice and Apple Cider: What’s the Difference?”). The consumer is left entirely separate from the production; I know I am. When I purchase apple cider (which has a modern production process almost identical to apple juice, excluding filtration) or apple juice, I am purchasing a good created in a factory countless miles away, a good that, had I lived in the 1800s, I would have produced in my own household.

While consumers may not be rushing for an apple cider press and flax mill in the near future, there is, however, indication that people understand the value of preparing food within the household and have been recently seeking to make it a larger piece of their lives. Evidence suggests that millennials, or those borne in the 1980s and early 1990s, value home cooking. Millennials prefer to cook at home and most cook around five times a week. Thus, a younger generation is embracing cooking and preparing food, as opposed to purchasing prepackaged items (“Infographic Snapshot: Millennials on Cooking”). Further evidence of this trend can be found in the growing popularity of companies such as Blue Apron. Blue Apron allows customers to pay a subscription fee in exchange for fresh ingredients and recipes hand-delivered to their door. The subscriber can then cook the meal for themselves (Wiebe). There is considerable benefit to eating at home. Pre-packaged foods tend to be filled with unhealthy fats, sugars, and salt. Though these may be enjoyable and acceptable to eat on occasion, in excess, they have negative health consequences. Preparing meals personally, gives the consumer the ability to make healthier choices. There is also emotional benefit. When a family prepares food, they are working together for a common goal. This encourages bonding, as does the simple act of sharing time together. Preparing food can be a mindful, even creative act, if done under the right circumstances. Selecting a recipe, carefully collecting ingredients, and taking the time to make something successful, can provide a powerful sense of accomplishment and even boost self-esteem. The calming simplicity of moving through the process can also provide a respite from a hectic day (Routledge).

My family tries to produce many foods on our own. One particular favorite of mine, is applesauce. We purchase apples from a local farm, roast them, and grind them with a hand cranked machine. The process is surprisingly enjoyable and yields delicious results, which I feel taste exponentially better than their supermarket counterpart. I hope that no matter how the culture surrounding food changes, the simple act of preparing food will never cease to exist.

Though scientific, technological, and social progress beats undeniably forward with the passage of time, that does not mean that all facets of the past are destined to irrelevancy. Taking time to home cook foods and meals should be a piece of history welcomed into the future. I know in my personal future I will seek to make home-cooking an even more prominent part of my life. Perhaps, one day, I will even purchase my own apple cider press.