Storyteller and Musician Van Wagner at the Taber Museum 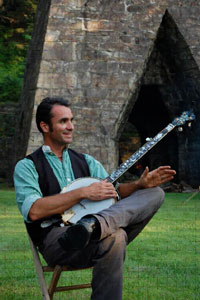 The Thomas T. Taber Museum of the Lycoming County Historical Society’s May program featured Van Wagner, a regional storyteller and musician, who presented the ‘Tall Timber & Log Rafting Heritage Program’ followed by his popular musical tribute to the logging and lumbering heritage of Pennsylvania. The free program was well attended by more than 50 people.

Admission to the museum was also free as the presentation occurred on the third Sunday of the month.

A resident of Danville, Van Wagner is an educator at the Lewisburg High School where he teaches Environmental Science. He has achieved several awards during his career including the Sandy Cochran Award for natural resource education from the Pennsylvania Forestry Association in 2012. Outside the classroom he enjoys educating his audiences with his music and programs on Pennsylvania history. He has been featured on the History Channel, WVIA TV and on Country Music Television. He has released 16 original albums and published a book entitled “Coal Dust, Rust & Saw Dust.”

The lecture/concert was part of the year-long series exploring the musical heritage of central Pennsylvania. It was sponsored by the Woodcock Foundation for the Appreciation of the Arts, Inc.