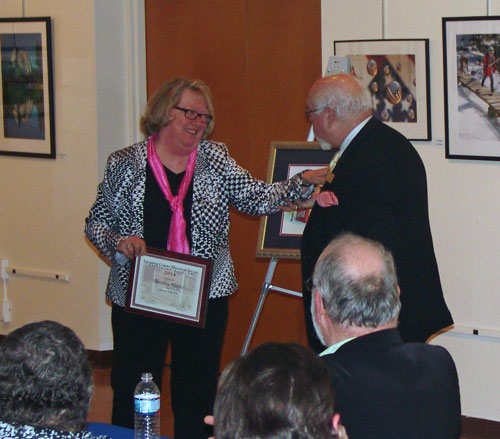 The Lycoming County Historical Society honored several members during its recent Annual Membership Meeting held in the Community Room at the Taber Museum.

Dorothy Maples was honored as Volunteer of the Year. Since 1996, Mrs. Maples has been involved in many aspects of cataloging and inventorying a wide variety of artifacts including clothing and textiles, photographs, music and theater programs, and manuscript collections. Mrs. Maples, working with Martha Huddy, identified, described and inventoried over 5,600 items from the LCHS textile collection. 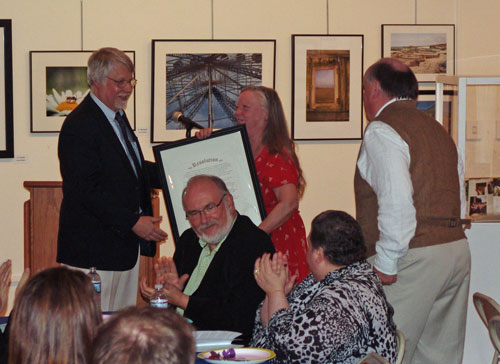 Also honored during the evening were Martha and Steve Huddy who received an “Award for Exceptional Service” to the Society for their five years of work researching, writing and producing the documentary film, “SURRENDER! The Sudden Death of Alvira, Pennsylvania.” The Huddys donated ticket sale proceeds from the movie’s premiere at the Community Arts Center to the Historical Society. Mrs. Huddy also received a Certificate of Appreciation for her service on the LCHS Board of Governors.

The evening’s program was presented by Dr. John F. Piper who highlighted the history of Williamsport’s Home for the Friendless and its role in the care of orphaned children and elderly women. Dr. Piper’s remarks included references to the “social gospel” and the Progressive Movement in the U.S. to give a broader historical context to the work of the Home. Started in 1872, the Home for the Friendless provided the organizational foundation for the current Williamsport Home, located just north of the city.