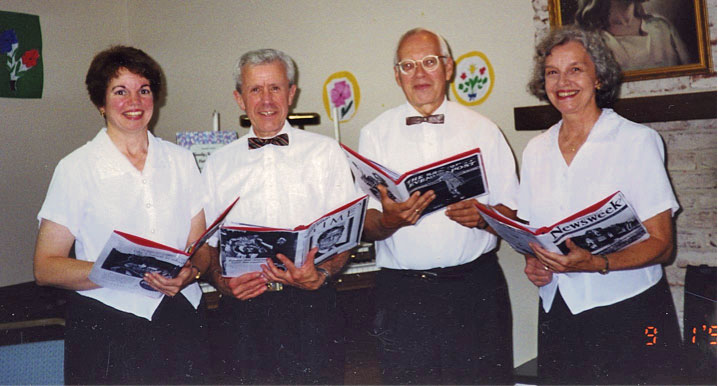 On Sunday afternoon, October 21, 2012, a program of Stephen Foster (1826-1864) songs was presented by the Buffalo Valley Singers Quartet. The performance was held at the Thomas T. Taber Museum of the Lycoming County Historical Society in Williamsport, PA.

The Buffalo Valley Singers, founded in 1973, is now located in Lewisburg, PA serving communities within a 40 mile radius. Members of the Quartet are: Soprano, Ruth Blankenship; Alto, Lucie Rivoire-Knauer or Judith Blee; Tenor, Joseph Keller; Bass, Lloyd Wolf or Thomas Ruhl. A native of Pennsylvania, Stephen Foster wrote many songs still familiar to the present generations. The songs were written between 1844 and 1864 (Civil War Era) and will be presented from their original publications. Some examples are: “Old Black Joe”, “Old Folks at Home” (S’wanee River), “My Old Kentucky Home” (a favorite of President Lincoln), “Beautiful Dreamer”, “My Wife is a Most Knowing Woman” and “Come Where My Love Lies Dreaming”. Most songs were sung by the A’Capella Quartet but Solos and Duets were added with Piano Accompaniments by Judy Blee.

The Society program continued the 2012 Lecture Series which combined Coffee Hours (second Thursdays at 10am) and the Society Programs (third Sundays at 2 pm). 2012 themes explored and celebrated the 150th Anniversary of the Civil War. Topics included the Fishing Creek Confederacy, the Reno Post of the Grand Army of the Republic, the life of a Civil War widow, and a portrayal of Major General Winfield Scott Hancock.

This performance was underwritten by the Woodcock Foundation for the Appreciation of the Arts, which awarded the museum $1,000 for support of the museum’s Civil War activities during the year 2012. The Foundation is a charitable granting agency which has adopted as its mission statement, “So long as there are little children to be introduced to the creative arts and harried adults who missed exposure to great art and literature and timeless music to be share across all age groups, there will be a need for efforts to encourage the Appreciation of the Arts.”