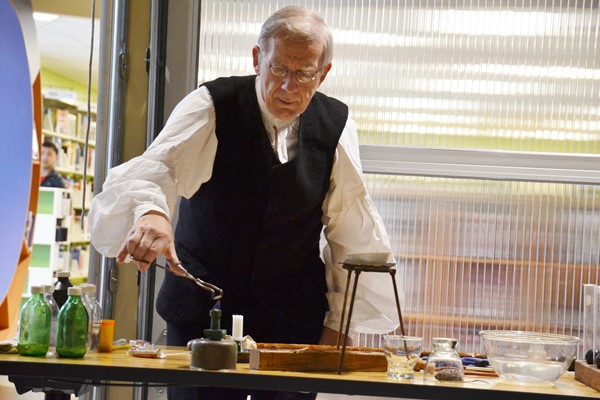 Williamsport- The Thomas T. Taber Museum of the Lycoming County Historical Society will hold a Children’s Workshop on Saturday, October 12, 2019, at 2pm in its Community Room. Inventor and theologian ‘Joseph Priestley’ will be visiting from his nearby home in Northumberland. Priestley, credited with discovering oxygen, is portrayed by Ron Blatchley. The free workshop will include hands-on scientific experiences for children.

Priestley was a theologian, known for his outspoken views regarding religion. His house was burned in his native England, suggesting that he was no longer welcome in his own country. He fled to the relatively obscure town of Northumberland, Pennsylvania in 1794 and continued his experiments with scientific endeavours, preached, and wrote controversial articles. In scientific circles, he is credited with discovering the physical properties of oxygen. He counted among his friends and associates Benjamin Franklin and Thomas Jefferson.

The workshop is free and open to the public, but pre-registration is strongly suggested. A child may be registered by calling 570.326.3326 or by signing up via lchsmuseum@verizon.net. The workshop is the second in a series of scientific Children’s Workshops, supported by a grant from the Free and Accepted Masons. A third workshop, ‘Monarch Madness’ will be held on Saturday, October 19, led by Katie Cassidy. Children will be making seed mudballs, which contain the seed of the milkweed plant, crucial for the development of monarch caterpillars into monarch butterflies.

The museum is located at 858 West Fourth Street, Williamsport. Ample parking is found to the rear of the building or on the street.