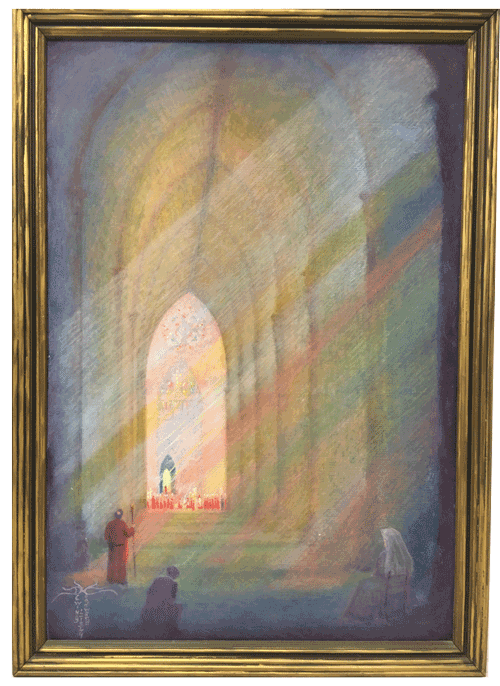 The museum has recently acquired a painting entitled Vespers by the Williamsport artist Dewing Woodward. It is an exciting acquisition as many of Woodward’s paintings were lost in a studio fire. They rarely come up for sale. A very generous gift from Mary Sieminksi and her husband Richard Allen, has allowed for the acquisition of the Vespers painting.

According to Richard the donation was made in honor of Mary’s contribution to the portfolio of knowledge concerning women’s history in Lycoming County. Upon presenting their check, Mary remarked, “Richard and I are pleased to be able to bring it to Williamsport.” Mary’s articles appear regularly in the Williamsport Sun-Gazette as well as in the compilations of her articles (and other authors) in magazine form, Women of Distinction, Volumes 1 and 2.

The painting reveals the interior of a cathedral apparently situated in Toledo, Spain. The sun shafting down through an unseen stained glass window creates a rainbow of color across the width of the painting. A nun kneels humbly in the lower right corner of the painting, and monks appear on the left side of the painting. The altar is visible in the background.

Martha Dewing Woodward was born in Williamsport in 1856, the daughter of John Vanderbilt & Wealthy Ann York Woodward. At an early age, she showed promise as an artist. She attended the Hattie Hall Seminary for Young Ladies in Williamsport, later studying at the Pennsylvania Academy of Fine Arts and the Academie Julian in Paris. In 1897, she established the Dewing Woodward School of Drawing and Painting in Provincetown, Massachusetts. The school was the first summer school in Provincetown. In 1907, Dewing in partnership with Laura Johnson created the Blue Dome Fraternity in Shady-in-the-Catskills, near Woodstock, New York. The ‘Blue Dome’ was the sky, the plein air sessions were held for the purposes of painting the nude figure within nature. Controversial for its day, the ‘Blue Dome’ studio burned in 1912. Many of Dewing’s works were lost in the fire.

In 1919, she moved to Florida and continued an active role in the arts in Miami and Coral Gables. She died in 1950, aged 94, and her cremated remains were buried in the family plot in Wildwood Cemetery.

The painting will soon be on display in the Fine Arts Gallery.

What was That Object Displayed at the Fair???