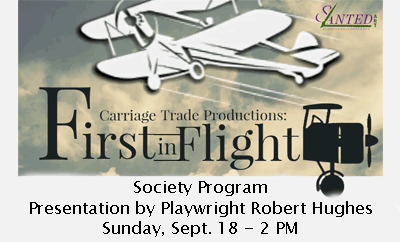 Williamsport- The Thomas T. Taber Museum of the Lycoming County Historical Society will be featuring First in Flight as presented by playwright Robert Hughes, on Sunday, September 18, 2022, at 2pm. The presentation, one of the Society Programs in the Taber’s Lecture Series, will be held in the Community Room of the Museum. It is free and open to the public.

First in Flight will explore the triumphs and disappointments of Orville and Wilbur Wright, who Hughes labels as ‘symbols of America Can Do’ with their ingenuity and grit. The Wright Brothers were encouraged to be entrepreneurial, owning both a bicycle business and publishing a newspaper, as well as ‘pilots of the sky’ scientists. They succeeded and of course, wrote their names in the pages of American aviation history.

Robert Thomas Hughes, of Carriage Trade Productions, has performed throughout the region in a long-list of plays and performances. Among Hughes’ characterizations are his portrayals as actor John Barrymore in “Barrymore’s Ghost” and as playwright Jason Miller in a biographical play, “Go Irish! The Purgatory Diaries of Jason Miller.”. His work also includes a depiction of coal miners’ lives, an ‘interview’ with Frederick Douglass, a dramatization of the life of Franklin Delano Roosevelt, and a forthcoming sketch of Holocaust survivor Elie Weisel.

As the Society Program coincides with the third Sunday of the month, admission to the museum is free. The Third Sunday of each month May through October features free admission. The Lecture Series combines the Sunday afternoon programs with Thursday morning Coffee Hours. The lecture series is generously sponsored by the Woodcock Foundation for the Appreciation of the Arts.

Located at 858 West Fourth Street, Williamsport, the Thomas T. Taber Museum of the Lycoming County Historical Society provides a history of the region with information about Native American culture, frontier exploration, the development of the Pennsylvania canal, immigration during the 19th century, and the logging and lumbering era of the nineteenth century. The Taber Museum also houses the world-class Larue Shempp Model Train Collection. The museum is open for touring Tuesdays through Fridays, 9:30am until 4:00pm; Saturdays, 11:00am until 4:00pm and Sundays (May through October), 1:00pm until 4:00pm. There is ample parking behind the museum and along the street. For further information, please contact the museum at 570.326.3326.

Quilt Like Your Great Granny Quilted: A Quilting Class at the Taber Museum