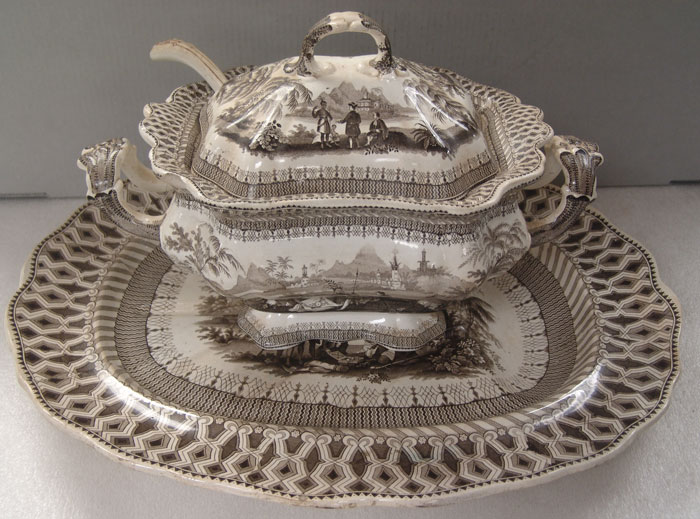 This ceramic soup tureen and undertray was made in Staffordshire, England by Thomas Godwin and features a scene of William Penn negotiating a treaty with the Lenape Indians at Shackamaxon village (near present day Philadelphia). When examining the background closer, one may expect it to look like colonial America, but Godwin instead has mid-eastern buildings and palm trees in the backdrop.

Household ceramics like these during the Victorian era were created through a process known as transfer printing, which involved using a metal plate to transfer an engraved image on to the exterior of a selected piece of ceramic. This allowed for the mass production of transferware and gave English factories the ability to manufacture a variety of patterns. Another innovation of this ceramic set is the distinct grooves in the undertray, which allows for any spilled liquids to collect in the concave section to the right. While the original ladle does not accompany this set, it likely resembled the one shown here.

2020 Lecture Series: A Twist in this Pennsylvania Tale…
Please Support the LCHS Through Raise the Region 2020!
Love is in the Air at the Taber Museum